This letter was written by Sergt. Joseph R. Irwin (1837-1901) of Co. H, 46th Regt. Pennsylvania Volunteer Militia—one of the state militia units activated during the summer of 1863. They were organized in early July and discharged some six or seven weeks later in August 1863. The 46th and the 59th Pennsylvania Militias were sent to Philadelphia where they spent most of their time on guard duty.

I have nothing striking to relate but thought perhaps by writing I would hear from you soon. I have not very good facilities for writing therefore you will have to overlook all imperfections.

We are passing away the time drilling, eating and guard duty—the latter is not very pleasant one, however. I have not to perform it only as sergeant of the guard. Us sergeants have been promoted one step by the promotion of our former Captain ([C. F.] Huston).

We have a Brass Band attached to our regiment which is quite an addition—especially to those who are fond of music. The Band is now playing “The Girl I left Behind Me,” which attracts my attention no little. The First Bellefonte Company is now quartered in Camp Juniata one half mile from here. There are not many in it I am acquainted with; Isaac Mitchell, Jimmy Austin, Joe Valentine, and a young Harris is about all. Also H. B. Swoopes’ company is Camp Juniata [near Huntington, PA]. I am acquainted with most of them. I wish you would send me any news from Mag hear from Bill & John. Also County papers occasionally. Did you receive the piece of music? I am particularly interested in that. Tell Uncle John to send me five dollars. I am about out of that evil. Before we came into camp it was pretty hard on the cash. Love to all. 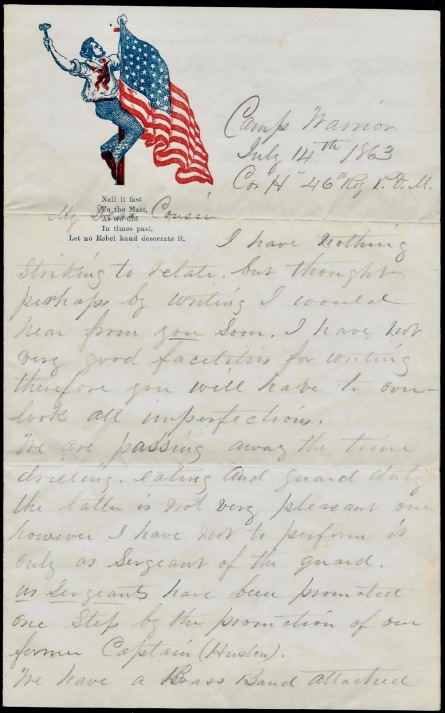