This letter was written by Benjamin F. Stephens (1843-Aft1870) of Co. B, 1st Illinois Light Artillery. At the time of the 1860 US Census, Benjamin was enumerated as a 19 year-old painter in the household of 49 year-old painter Langdon Miller of Batavia, Kane county, Illinois.

Benjamin wrote the letter to Don Carlos (“Carl”) Newton (1832-1893) of Batavia, Illinois. In December 1861, Carl helped to organize the 52nd Illinois Infantry and became the Captain of Company D.

[Note: The lithograph in the header depicts Bird’s Point, Missouri, opposite Cairo, Illinois.]

I received your letter dated the 22nd and was glad to hear from you. I called our Batavia Squad together and read the news. It kept them laughing all the time I was reading it. When I read that portion of scripture about Smith’s girl, it made him blush clear down to the heals. Case thinks thinks the old Dutchman is pretty rough on Uncle Sam’s soldiers.

Yesterday three of our scouts come into camp with nothing but their drawers on and was dripping wet. They had been chased in by about 60 rebel cavalry. They shot their horses from under them and they had to run to keep from being taken prisoners. They pulled off their coats, vests, pants and shoes and jumped into a swamp and swam away from them. We had orders to pack and get ready. We had teams standing to the guns all afternoon ready for action. When night came, they unhitched.

Right after dark, myself and three other boys went outside of the breastworks and made a charge on a nice fat hog. We had three sabres, one dirk, and a club, and we run him down and stuck him. It is against the rules to shoot firearms after dark and we was bound to have the hog. After we had gained the victory, about 9 o’clock we had a severe attack. The enemy made a charge. I has as many as a dozen on me at once. The enemy was fleas and mosquitoes. They charged on me several times but no severe wounds.

Yesterday I was detailed to take care and feed 20 mules. I say darn the mules. While I was leading five of them to water, the darned long-eared things almost pulled me into the Mississippi but I got along with them very well after that.

I have been laying on the soft side of a board ever since we have been here until now. I got a coffee sack and filled it with hay and it lays much easier. Yesterday morning you would laugh to seen us drilling. When the horses gets under full running, we sit on the casings and it jumped us up about three feet to a time over stumps, ditches, and so forth. O, it is fun! Hurrah for the Union! Who cares whether school keeps or not. I thought I would die a laughing when we was drilling. One of the sergeant’s horse was first up behind then before & behind way went Mister Sergeant off onto the ground. Away went Mr. horse. He said goit friends. Bully for horse.

I have received three letters from you. Write every time and I want all the rest to write. Give my respects to Mrs. D. C. Newton and Anna, if she is there. 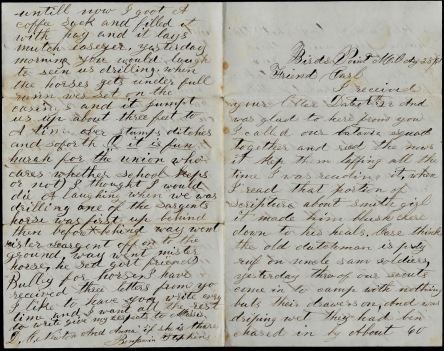 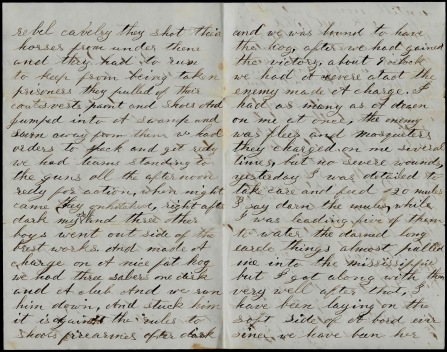