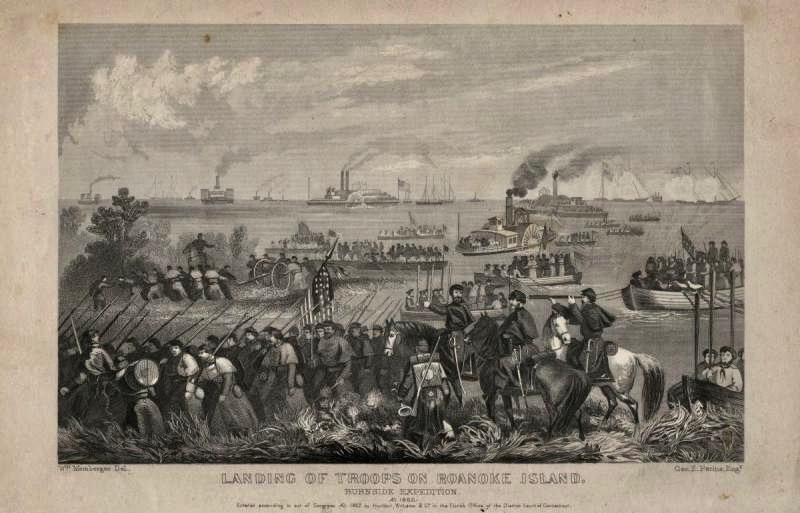 These three letters were written by 3rd Engineer, Charles E. Macdonald [McDonald] who served aboard Gen. Ambrose Burnside’s flagship, U.S. Picket, during the Burnside Expedition to North Carolina in 1862. The first letter describes the successful amphibious operation in which Roanoke Island was captured. The second letter was written following the capture of Newbern, and the final letter was written from Washington, North Carolina, just prior to a planned expedition up the Tar river to Greenville. Because of its shallow draft, the Picket proved to be particularly valuable for covering the landing of Union troops at Roanoke Island, Newbern, and Fort Macon.

Charles was still serving on the crew of the gunboat Picket when it was sunk on 6 September 1862 in the Tar river at Washington, North Carolina, during a surprise attack by Confederate troops. After firing only one gun, the boat’s magazine exploded killing the captain and 18 crew members. Charles was one of ten crew members who escaped the explosion without injury (see casualty list newspaper clipping below). “According to the report of the engineer, her magazine exploded just as Captain Nichols had ordered the men to quarters. It must have arisen from carelessness in opening the magazine.” [report of Lt. Col. Edward E. Potter, 1st N. C. Infantry (Union).] A correspondent for the New York Herald who examined the wreck of the gunboat Picket on the day after the explosion claimed she had “completely severed in two, apparently about midships. The wreck lay in about eight feet of water, with a portion of the machinery and other iron work still exposed to view. After the explosion, the vessel took fire whereupon all the woodwork above the present water line was totally consumed.” Without regard to the sensitivities of the families of the lost crew members, the reporter went on to write, “Near where the engine room door was there lays the crisp form of a dead man, and about midships, or in close proximity to where the vessel divided, a small piece of the gunwale projects forward, and on this hangs the leg of a human being, with the foot encased in a neat shoe and stocking—apparently that likely to be worn by an officer. This fragment is supposed to be a part of that which at one time went to constitute a portion of the body of Capt. Nichols…He leaves a wife and family in New York.”

In 1973 the wreck of the USS Picket was discovered and the site surveyed. The iron hull is intact.

[Note: These letters are from the personal collection of Jim Doncaster and are published by express consent.]

I suppose you think it is time that I wrote to you and I will try to make up for lost time. I left New York on the 17th of December and at that time I felt [so] very down-hearted, I could not even write home—and I then thought we should be back in one month. But now it is very uncertain. It may be one month and it may be six.

I am 3d Engineer on board of the U.S. Gunboat Picket ¹ and I have very easy times. We are the flag ship of the Burnside Expedition and have the General on board most of the time. I smelt my first powder on the 7th of February. We blazed away in fine style at the forts on Roanoke Island and they returned the fire with spirit but not much effect. The action lasted about 4 hours. We did not even get a splinter knocked off and but one man slightly wounded. We then hauled off to cover the landing of troops which ended the first days fighting at daylight. The troops commenced the attack and carried the works by storm and by 5 o’clock the stars and stripes was hoisted on the last fort and the whole island was surrendered to us—about 3500 prisoners and 4,000 stands of arms. This you will get more fully in the newspapers.

I am well and enjoy myself very well and if the other divisions of the army is as successful as we are they will soon put an end to the war. I have just now received a letter from home dated the 3rd of February. They were all well then. I have no more to say at present but if we return safe to New York, I shall call on you as I go home and then I can give you a full account of the whole affair.

Write as soon as you get this and let me know what news you have of the expedition and the [U. S. Gunboat] Picket in particular. I should like to have you send the paper that has the account of the battle for we very seldom get any news but what we see. Write soon and I will write the first opportunity. Give my best respects to Uncle George and tell him to kiss you for me.

From your great ugly nephew, direct to, — C. E. Macdonald

¹ “The gunboat Picket…was one of the first boats purchased and altered for the Burnside Expedition. She was originally a canal propeller, very narrow in the beam, and about 120 feet long. She was converted into a gunboat, armed with three twelve-pounder Wiard guns, on slide carriages, forward, and one stern chaser aft. [Another account—probably more accurate—states that she mounted a 32-pound rifled Parrott forward and a 24-pound howitzer aft]. She had a small but sufficiently powerful screw propeller engine. She was Gen. Burnside’s flagship. Her commander was Thomas P. Ives of Providence, who continued with her until after the capture of Newbern, taking part in all the actions in which Burnside’s gunboats were engaged. At Roanoke, her commander and crew covered themselves with glory, fighting the enemy at short range. On Capt. Ives retiring, he was succeeded in command by Capt. S. D. Nichols, of Howard’s Marine Artillery, the whole fleet of army gunboats having been placed under command of Col. Howard.” [12 September 1862, New York Tribune]

I received your kind letter and also the paper that you sent but I have been prevented from writing by being on an expedition up the Albemarle Sound and have just returned. Victory follows the general [Burnside] wherever he goes. He is the pride of the army as well as the civilians where he is known.

My health is good and so is the health of the army generally. You will get the news of the last battle before this reaches you. There is but one more town of any importance. That is Wilmington and I am in hopes they will give up the contest before we get there. If they hold out, we shall take it for there is no such word as fail with New England troops and Burnside to lead them.

I am getting homesick but I do not like to leave till the expedition is over. Write often and don’t wait for me. Your letters are always thankfully received and read over twenty times at least. Give my love to all enquiring friends and especially to yourself and Uncle Stow.

P. S. You must excuse the half sheet for I have sent the other half home and cannot get any more today and the mail leaves early in the morning.

In my last letter I promised to write soon but we have changed our position so often and the mail is so irregular that it is uncertain when we can send our letters. It is now about 3 weeks since I have had any mail and do not know when we shall get it. We are doing more than our share of duty, being underway nearly every [day] running up the long crooked river and as soon as we find a rebel camp or outpost, the voice of our long 32 Parrott gun gives them notice to leave which they do without stopping to argue the point. It has been said there was a great Union feeling in this state but we have failed to discover it yet. But I will not talk politics. It is enough that I am here and all things considered, am doing well, but I cannot tell from one month to another how long I shall stay.

We had some fighting last Friday in which the army lost 7 killed on the bank of the river near Washington but we have not had any casualties on board yet today. We are to go up the river to Greenville 30 miles and as we are about starting, I will close with my love to you and uncle. Write soon and direct.

P. S. You will please excuse the last letter. It should of had a stamp but the person that took it to the office was afraid he would lose his 3 cents and I did not find out that it was franked till day before yesterday but I did not neglect to damn him some for it. I hope it went safe for they are not very careful of franked letters. 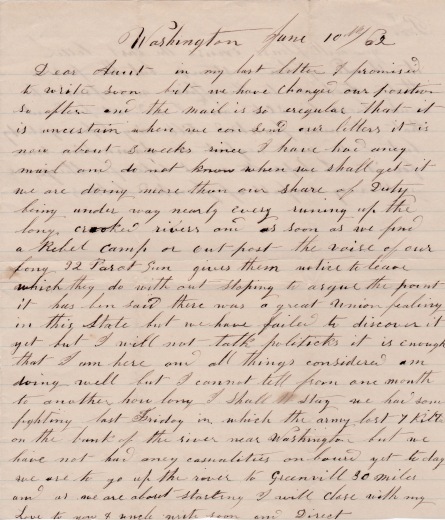 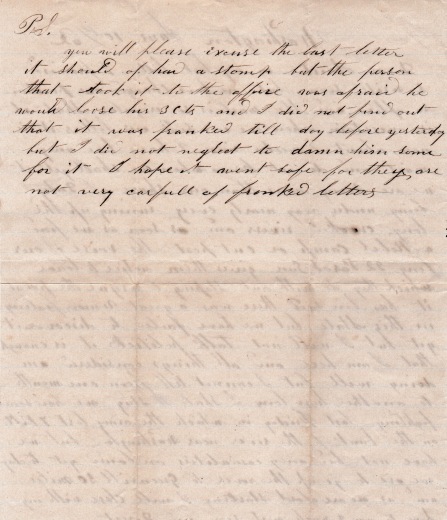