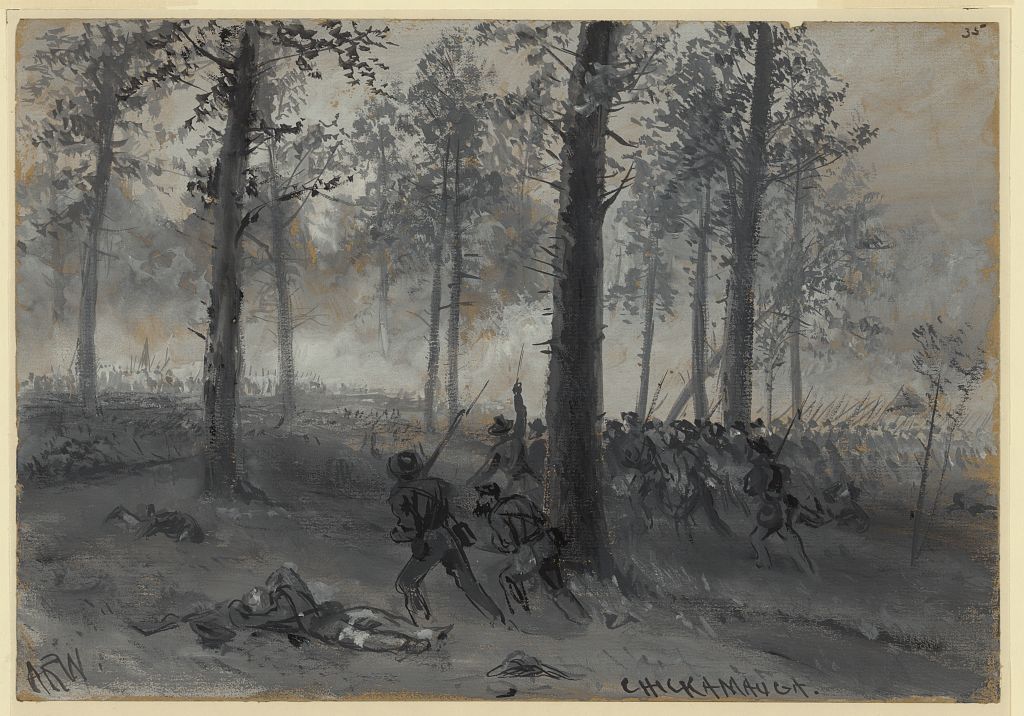 This incredible letter was written by Charles L. Fox who enlisted at Terre Haute, Indiana, in late January 1862 to serve in the 8th Indiana Light Artillery. Although I cannot find any personal information about Cpl. Fox, his account of the Battle of Chickamauga captured in this 6-page letter to his sister is altogether riveting and seems to have never been previously published. It was offered to me for transcription by Jim Doncaster who claims it as one of the most cherished letters in his collection.

“I presume it is useless to give you the details of the fight in general,” Charles wrote his sister, “but shall speak only of our Battery and myself, my losses, and my narrow escape, and what saved me. I cannot say with some others that I came off without a scratch for I did not.”  The “scratch” Cpl. Fox sustained turned out to be shards of glass from an Ambrotype of his “intended” that had ripped first through his bible before slamming into and destroying the beloved picture that he credited with saving his life.

After waiting a long time in hopes of hearing from you, I now attempt to write you another, thinking perhaps that my other epistle may have been mislaid or miscarried. I am well and hope this will find you the same with no apprehension on my account for no doubt you have heard of the two days battles on the Chickamauga Creek which I was in and took quite an active part, having been so closely engaged as to lose our entire Battery with the exception of 1 limber and two caissons. I thought that Stone River was warm work, but that was play compared with the two days fighting on the Chickamauga or deadman’s river. I presume it is useless to give you the details of the fight in general, but shall speak only of our Battery and myself, my losses, and my narrow escape, and what saved me. Well I cannot say with some others that I came off without a scratch for I did not.

I shall not try to describe our position for anyone not acquainted with the mode of forming a line of battle, it would be rather difficult to understand. It is enough to say that we were called from the left center of our army to support our left wing on Saturday morning about ten o’clock of the 20th of September where we had been in position on the bank of the Chickamauga River for three or four days, occasionally shelling the Rebs as they chose to show themselves. But the rascals seeing that we were prepared for them all along our line moved to their right (our left) and there concentrated all their faces knowing that was their only hope with the forces they then had. They had it well planned, but as the old saying is that the best laid plans of men and mice sometimes fail, so it was in this case; for their plan—or rather Gen. Bragg’s—was to get reinforcements from Richmond and draw in all his scattered forces in Mississippi and Alabama, Western Virginia, and then with one mighty blow sweep Rosy [Rosecrans] and his army from the soil of East Tennessee and again come in possession of their saltpetre works and coal mines and salt works, Chattanooga and all, and even to go so far as to take the little city of Murfreesboro which we laid and fortified for six months just for the benefit of such fellows.

But Rosy was as contrary as a hog to drive although they did out number us four to one. Well, they—after moving from the left of center to the left wing on Saturday—were kind and condescending enough to leave us one gun and all the caissons. That gun was No. 3—the one on which I belong. But that evening some of the boys in the infantry not liking for them to have them, charged on the Rebs and took them [back] again. So we came out as we went in excepting one man killed and several wounded and missing.

But now, my losses. In that day’s fight, I lost one overcoat which I miss very much—especially in this wet weather. My knapsack with my portfolio in which were all my letters, and my letters from my Dulcinea, and paper and stamps, envelopes, &c. to the amount of $2.00, but your picture I carried in my watch pocket in my pants. [I also lost] my knapsack [that] contained all my clothes, therefore leaving me without any clothes except what I had on my back and cold, frosty night at that. We slept as best we could on Saturday night and on Sunday morn about ten o’clock in the morning we were called out but it was so still and calm. Not a random shot broke the awful stillness which led us all to think that the Rebs were in favor of observing the Sabbath as well as Rosy who gave orders not to bring on an engagement unless attacked.

But suddenly the storm of war broke upon us and for a moment you would think that all of Heaven’s artillery were turned loose. On they came like a line of demons, yelling like fiends incarnate. Still they were massed on their left. They came column after column, line after line, and our gallant soldiers stood, but not long, for no man or set of men exposed to the fire of ten times their number at this particular point could withstand that terrific fire long unless he were something more than human. But on they came. Our men turned and run and we were ordered to retreat and did so. One gun run into a tree and the horses being shot down, the drivers were ordered to save themselves which they [were] glad to have an opportunity to do.

When we were ordered back, we were told to take a position on a hill [Horseshoe Ridge] just across the [Dyer Farm] cornfield which we were then crossing. And the infantry had the same orders but they were not inclined to do so and when we arrived at the top, not an infantry man was to be seen, so of course there was no support for our Battery. Here we unlimbered and commenced firing and when we would mow down their ranks, they were quickly filled up with free troops for Bragg had been receiving reinforcements since Saturday noon. They then halted in their center and threw round their right and left and on our right they flanked us, or in other words, came round so that they could fire across the length of the Battery, the regiments on our right having run and left us to the mercy of a cross fire. Well I was lying on my face after putting a load in the gun, waiting for No. 4 to fire it off when a minié came whistling along and went in on my left side, just above my waistband and through my blouse jacket, tearing a Testament all to pieces and completely riddling my pocket with holes—and worst of all, breaking my intended’s portrait into a thousand pieces. All I ever saw afterwards was a small piece of the matting. But I still have a small one although [not] so good a picture as the other. The picture was an ambrotype and the glass flew in my hand in many small pieces and that accounts for the scratch I received.

I think in all probability that the picture saved my life as it was next to me, the testament being on the outside. The ball passed through and into the opposite wheel where it lodged. But our horses being shot down—the most of them—we had orders to get what horses were not killed and get out of there, which we did. Out of three we attempted to cut out of the harness, we got one—the other two being shot down while loosening them. As we had no guns and nothing else to fight with, we came back to Chattanooga that night where we are at present in the Artillery Reserve ¹ and likely to be here some time where we are waiting patiently to hear from all our friends and relations. So please write soon and excuse mistakes and bad writing for I am out of practice. If it is not asking too much, I should like your photograph and your intended’s or maybe husband’s before this time. So no more at present. Goodbye.

Write all about our folks and anything you know about Father, Cousin Albert Irving, and all the rest. I remain your affectionate brother, — Chas. L. Fox

¹ In his after action report, Capt. George Estep of the 8th Indiana Battery stated that he believed the battery had fired between 700 and 750 rounds. “O lost 56 horses killed and disabled, 21 on the 19th, 35 on the 20th. I have only 35 serviceable horses left and some 10 or 12 unserviceable, battery, and forage wagons, 1 caisson, and 2 limbers. The enemy got with my caissons and limbers about 350 sounds of ammunition.”