I have just received your letter bearing date of October 30 and you may be sure that I was glad to hear from you. I thought when I first opened your letter that it had been a great while coming but I see by the date on the back of the envelope that it was not mailed until the month of November. I suppose you forgot to put it in the office as soon as you wrote it. Anyhow, I didn’t get it until this morning so you can’t blame me if you don’t get an answer as soon as you expected.

With your letter came one from Wilber. The folks at home are all as well as usual excepting Albion. He has got a sore eye. Aunt Betsy and Mary have moved into their new house. He writes that they are going to have an exhibition at the close of the Academy and that he takes part in it.

I am getting along after the same old sort, I believe I have no news to write. We had the privilege of voting on the eighth both for President and Governor. You want to know my politics do you? Well sir, I am a Democrat and voted for Abe, but for all that I am not so hard on Mac [McClellan] as most of the party. He has a great many friends amongst the soldiers and I think nearly all who have fought under him voted for him. I suppose there is no doubt but what Lincoln is elected by a large majority.

I got a town bond for my three hundred dollars from the town of Houlton payable in three years or rather father got it for me and he has it in his possession I suppose. It is drawing six percent interest. I have sent one hundred and ninety dollars to Hallowell of my pay. The rest I have spent foolishly, or the most of it. There is two months pay due us now which I suppose we shall get in a few days.

I was down to Brigade Headquarters yesterday to see Johnny MacGinley. He is alive and smart and feels well. Hadn’t heard from home for some time. Wanted to know how you and Edwin and Hick were making it &c. &c. &c. I believe I’ve nothing more to say to you this time so goodbye. Write soon. From your brother, — Albert C. Brown 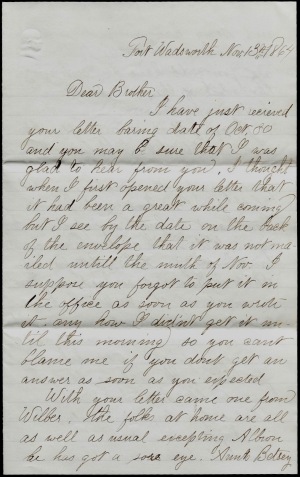 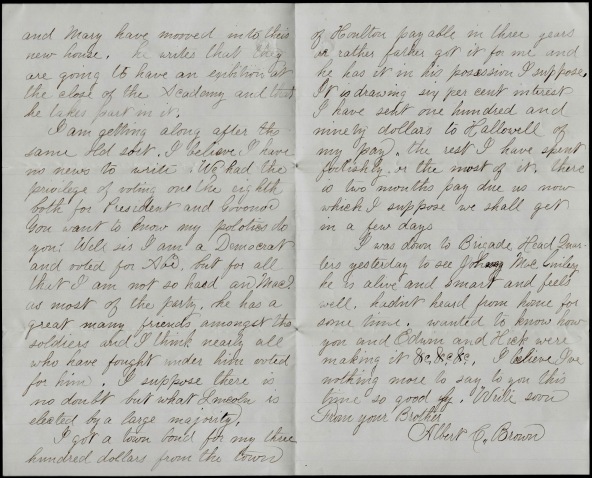