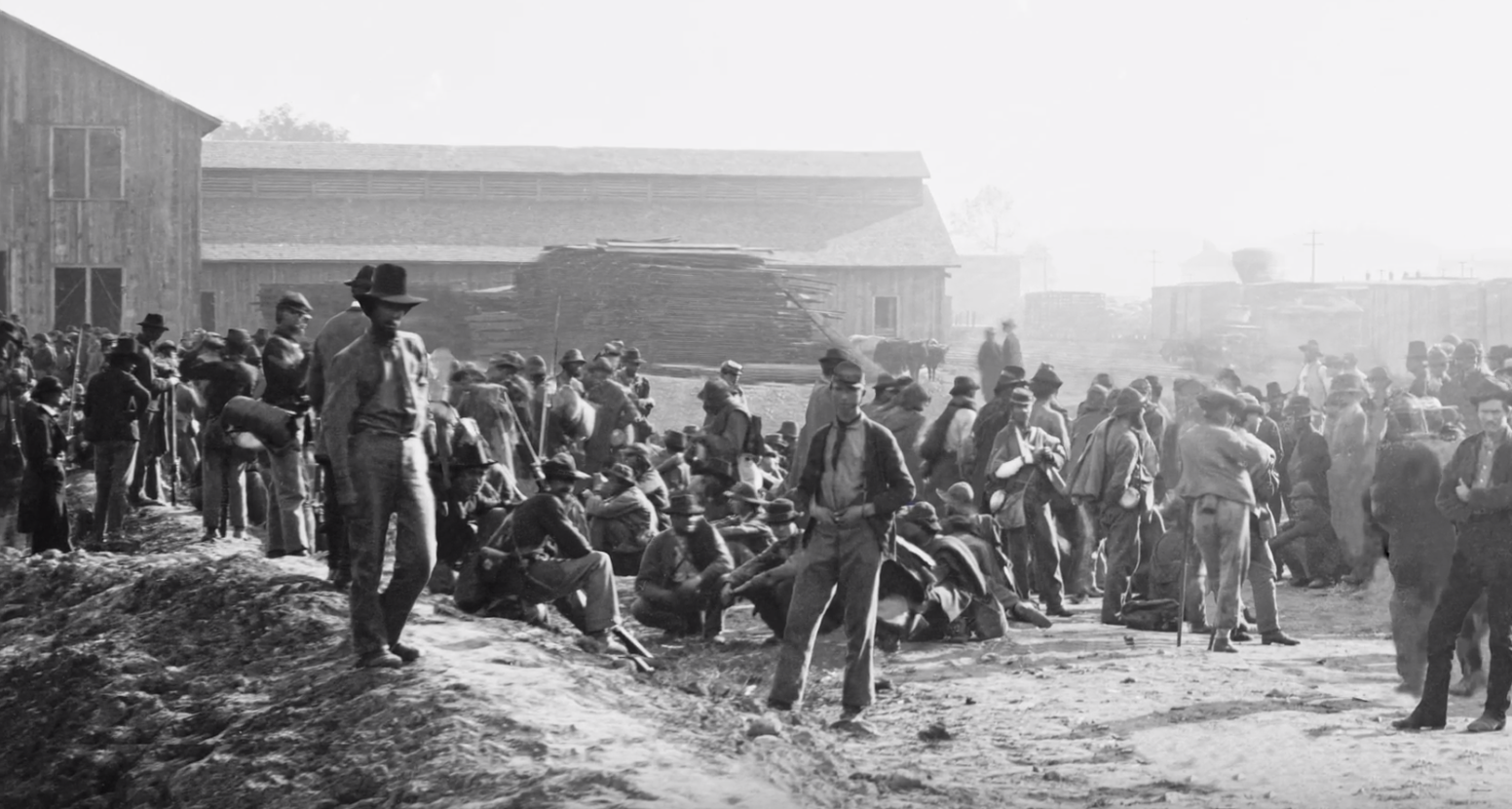 This letter was written by William Washington Wilkerson (1833-1893), the son of Presley Hawley Wilkerson (1811-1891) and Eliza Wyatt Foster (1811-1889) of Marion, Tuscaloosa county, Alabama. William’s biography states that he was educated in the common schools of his native county and at the state university began reading medicine. When 21 years of age, he graduated from Jefferson Medical College in Philadelphia 1855 and at once began the practice of medicine in Marion, Perry County, Alabama, at which place he resided until his death. He entered the Confederate Army 1862 as a surgeon in the 16th & 25th Louisiana Infantry, serving 18 months in the field and 18 months as head of a hospital at Eufaula. He was one of the founders of the Alabama Baptist paper in Marion. As business manager in connection with Rev. Dr. E.T. Winkler as editor in chief, carried the paper on for five or six years. After the successful establishment of this paper, it was turned over to the Alabama Baptist state convention by which it is still published. Dr. Wilkerson was for 15 the president of Board of Trustees of Howard College.

William wrote the letter to his sister-in-law, Nancy (Bryson) Wilkerson. Nancy (or “Nannie”) married William’s younger brother, Capt. Simeon “Cornelius” Wilkerson (1839-1897) of Co. E, 18th Alabama, on 9 April 1863 in Macon, Noxubee county, Mississippi. At the time of their marriage, the 18th Alabama was moving their camp from near Mobile to Middle Tennessee. Though Cornelius was wounded at Chickamauga on 19 September 1863, he was with his regiment two months later at the Battle of Missionary Ridge where he was captured and sent to the prison at Johnson’s Island, Ohio. He remained there until 13 June 1865 when he took the Oath of Allegiance and was released. Cornelius graduated from the University of Alabama in 1856 and practiced dentistry though he maintained a plantation in Tuscaloosa county after the war.

In this sorrowful letter, William informs Nannie of the particulars of her husband’s capture during the Battle of Missionary Ridge and of his “fine spirits” and preparation “for taking a trip north.”

[Note: This letter is from the personal collection of Jim Doncaster and is published by express consent. The image in the header shows Confederate prisoners held at Chattanooga Depot prior to their being transported to prison.]

I am sorry that I have to inform you that since the Battle of Missionary Ridge, Capt. Wilkerson is one of the missing. All the officers of his regiment are sure he was captured & not killed or wounded. About half the regiment was captured. Only one of his lieutenants and four or five of his men escaped. The brigade was flanked on right and left and only those that took time by the forelock or were first to leave their colors made their escape.

I shall send his clothing &c. to you or to Pa’s by first one going to either place. I saw him early in the morning the day of the fight [Nov. 25th]. He then had just come down from Lookout Mountain where his brigade had been sent during the night to check the advance of the enemy. In this little fight he told me that he did not lose a man. I thought he looked better than I had ever seen him and was in fine spirits. It was a very cold day and consequently he was well prepared for taking a trip north. He had just put on his flannels, had on his overcoat & scarf.

You are his idol and heavily will time drag until he is able to see or communicate with you. He has been uneasy about your health for some days. Such is the fate of war and I have no doubt but that he will submit to it with that courage which should characterize every good soldier.

We now are on picket and a cold & rainy day it is. My hand hardly feels as if it had anything in it, so you must excuse brevity, &c. I would not now be writing in the open wind but I know your solicitude and as I am not convenient to telegraph office, will not defer. Remember me kindly to your parents. Hoping that it may not be long before brother C[ornelius] can return to us, I remain your brother, — William W. Wilkerson, 16th & 25th La. Rgt., Adams Brigade, Stuarts Division 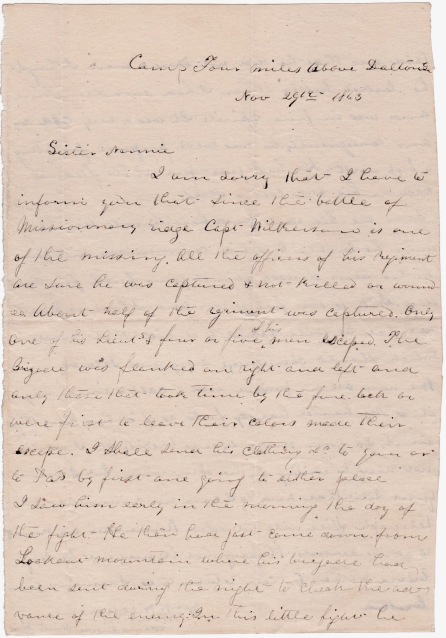 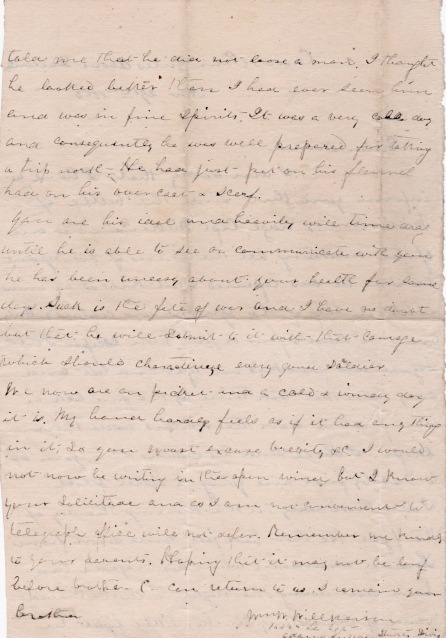