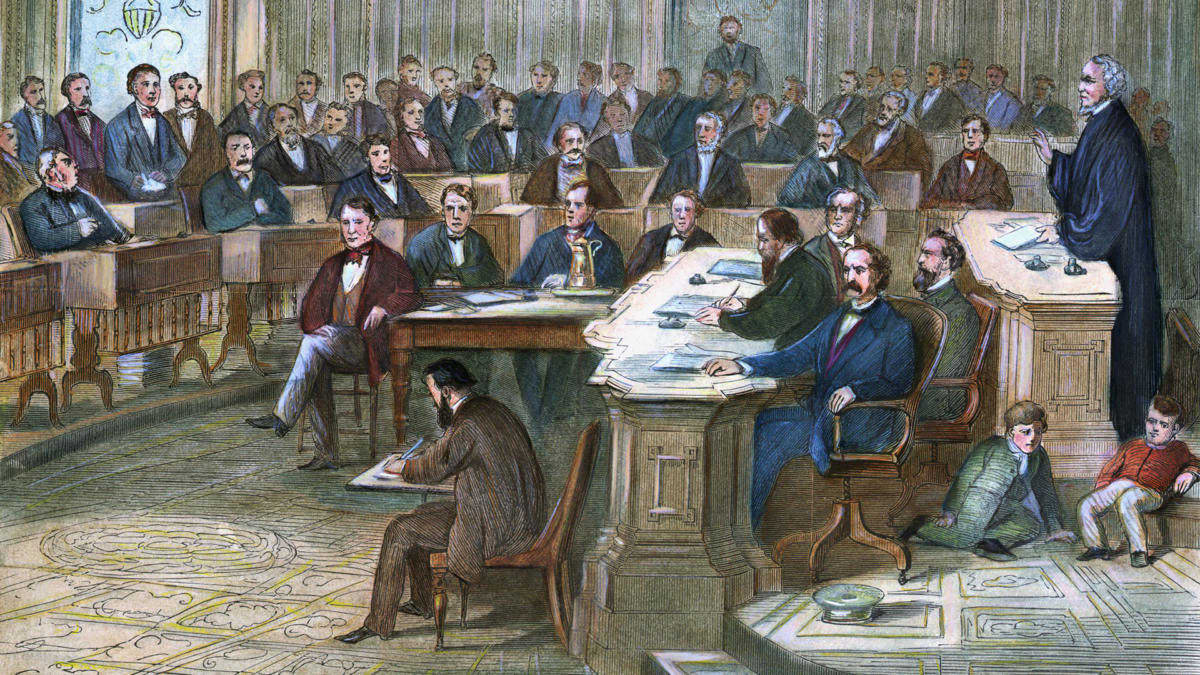 Sadly, this partial letter is missing the signature page so we are unable to identify the author. It was postmarked in Syracuse, however, which may have been his residence. The letter was addressed to Mat Underwood of Whitney Point, Broome county, New York, who I assumed was a male but the only individual by that name that I could find in Broome county was a female—Mattie Underwood (b. 1840), single, and working as a domestic servant in 1880.

Even without confirmation of the identity of the correspondents, however, there is content value in the letter which dramatically conveys the rising sentiments of Americans against the more radical elements of the Republican Party that had pushed through congress the Reconstruction Acts after the Civil War. When President Andrew Johnson—an avowed white supremacist—vetoed these acts, the Radical Republicans came to despise him and seek his impeachment.

Aside from mentioning the impeachment “fiasco” about to begin in Washington D. C., the author refers to the 6 April 1868 elections in Connecticut in which conservatives rebuked the following: the “unconstitutional acts of Congress,” the impeachment of the President (“the people of Connecticut frown upon it”), “military despotism of the South,” and “Negro suffrage, by Congressional usurpation, or Constitutional amendment at home—defeated emphatically.”  [See newspaper article below.] 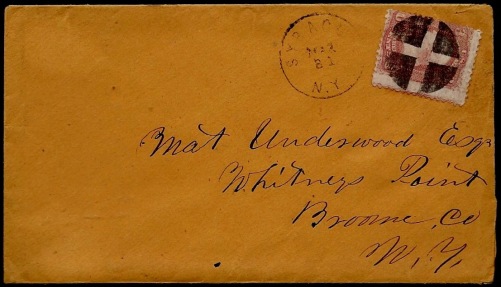 I received your line promptly and was glad to hear from you. The only fault I have to find is that there wasn’t half enough of it. Yet I am satisfied and would be glad to hear them oftener. I will say that it is almost impossible for me to get the police hopers as our news dealers do not keep them and there is now a very stringent law against selling what they call improper publication. I will send you some as soon as I can get hold of them, or something else just as good.

I have no news of importance to write as there is none of any consequence. Everything is absorbed in that great criminal who is soon to be tried at Washington for trying to uphold and defend the old constitution of the United States. I suppose on Monday next the great fiasco will open in the senate chamber at Washington where all the spite and meanness of Radicalism will centre for the next sixty days. Andy will make a strong fight and defend himself to the best advantage possible; but I am fearful it will avail but little as there is too strong a prejudice against him among the party in power. He will undoubtedly be suspended from office, his only source for defense is in the hearts of the people who will sustain him next November in his great effort to uphold & defend the institution of his country.

Radicalism is on its last legs already from over the eastern horizon a cheering ray of light breaks forth and ushers in the glad morning of defeat. And on the sixth of April, old Connecticut—the land of steady habits and patriots’ sons, will throw a bomb into the radical camp that will make them tremble. On every hand from Maine to California we see the United Democracy marching on with unbroken front to sure and certain success. 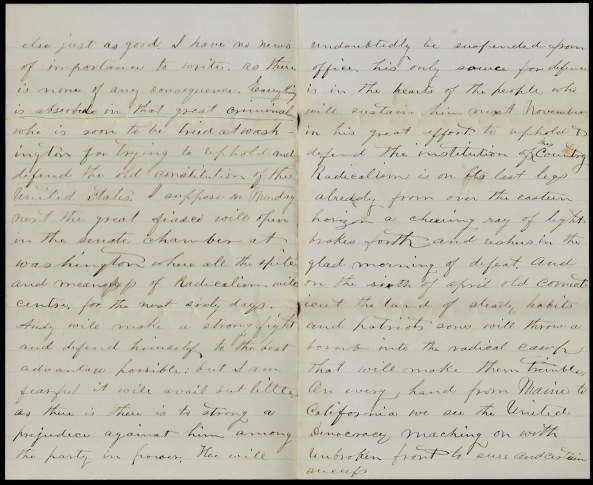