This letter was written by William Bragg (b. 1826 in Germany) of Yonkers, Westchester county,  New York, who enlisted in Co. A, 17th New York Infantry. He mustered into the regiment for two years on 20 May 1861 but only served until 20 February 1862 when he was discharged for disability.

The regiment—called the “Westchester Chasseurs“—went into camp at Camp Washington, Staten Island, until June 21, when it left for Washington D. C. and was stationed at Fort Ellsworth near Alexandria. With the 2nd brigade, 5th division, which was held in reserve, the regiment was present at Bull Run. In September it was posted at Fairfax seminary; in October was ordered to Hall’s hill, where it was assigned to Butterfield’s brigade, 1st division, 3d corps, and established permanent winter quarters in “Camp Butterfield.”

I take the opportunity to write a few lines to let you know that we got back from picket safe and sound but we had a mighty bad time of it. It snowed and hailed most of the time and quite cold and Wednesday coming back it rained very hard and froze. Our guns had a coat of ice in them about a quarter of an inch thick. Men had to walk about 6 miles through the rain. We got me to making &c. The boys kept up good spirits singing and hollering all the way back. I felt if I could walk 6 more miles.

Our company was at the quarters as we was before. We kept up a good big fire with rails in the house. Some of the other pickets has nocked the windows all out and doors off but we made it comfortable. We put boards up. I was on the fifth relief. There wasn’t room for us all in the house so we had our quarters in the barn a little ways from the house. The first night I slept in one of our new tents which we put up under the shed. These tents is meant for traveling only. There is three pieces so every three men has one [tent]. The 2nd night we was in the house singing and making all kinds of noises. We made noise enough to hear us a mile. Some of our captains won’t let the pickets make a bit of noise but we had a bully captain [who] wasn’t afraid of a little noise. There is one captain in this regiment wouldn’t let his boys hardly talk out loud. If he heard a gun fire, Jim be hang if he wouldn’t get his boys out in a line of battle—yes, or hear a cow bell ring. Well that’s enough about picket. None of our boys shot.

We got paid last Friday 26 dollars and I owed the sutler $4.50 and paid 50 cents for the band, 25 cents for the cook, and yesterday I bought a pair of boots for $3.50. Most of the boys has bought a pair. The mud is now half foot deep and they don’t come bad. The legs comes up to our knees. They are cheap boots. I thought I may as well buy a pair. I have them if I was home. I will send $10 home about next week. I thought it was best to wait a spell. Then I will have $6 left but I don’t think I will spend it all but it is best to have some money in my pocket. Don’t know what will turn up. Some of the boys owed the sutler about all they got.

One of the boys in our tent received a box this morning with roast chicken, apples, cakes, sausages, &c. &c. We live first rate in our tent. This is the 3rd box and I don’t see any signs of mine. I wish that you and Aunt Jane would send me a box. It don’t cost much to send it and put in some kind of large cakes and Aunt Jane, put in some butter, pickles, roast turkey. Oh! just what you are a mind too, nuts, &c. 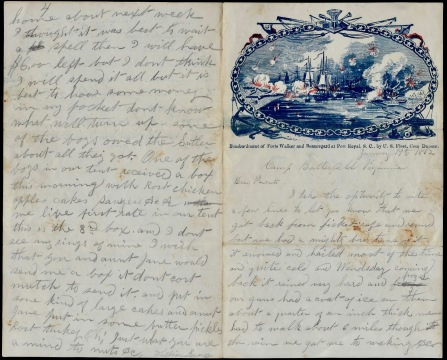