I received your letter last evening and was very glad to hear from you. I am going to commence to answer it this morning but whether I shall have time to finish it remains to be seen.

Instead of remaining where we were the night after I wrote my last letter to you, as I expected, about dark we received orders to start again & marched till two or three o’clock the next morning. Since then we have been on the move pretty much all of the time—part of the time following the Rebs and part of the time they have been following us. Our Corps has been in no engagement yet although we have been so near it we have heard cannonading all around us nearly everyday for the last week. Whenever we have halted we were drawn up in line of battle so as to be ready in case of an attack.

We arrived at the place where we are encamped at present Wednesday night. Just before we reached this place we passed through a run between some mountains called Thoroughfare Gap. We had some climbing and wading to do but got through safely. ¹

The weather has been pleasant most of the time since we came here. We have had some rain and the roads are getting to be a little muddy in some places. There is some talk of going into winter quarters before long. When we do, we will be likely to have easier times.

My health is good yet excepting a slight cold which I suppose I contracted by sleeping on the ground. I have had plenty to eat, drink, and wear so far & I guess as a general thing, Uncle Sam takes pretty good care of his soldiers. I have had no letter from home since I wrote to you before. I am looking for one every mail now. I don’t know as I have anything more to write at present. Write as soon as you can. Give my love to all hands and accept a share yourself.

¹ According to the unit history, the regiment passed through Thoroughfare Gap in the late afternoon of October 20, 1863. They bivouacked “on a hill near the west end of the gap” at 9 p.m. after a march of five miles. On October 24, 1863, they marched back through the Gap on their way to Bristoe Station. 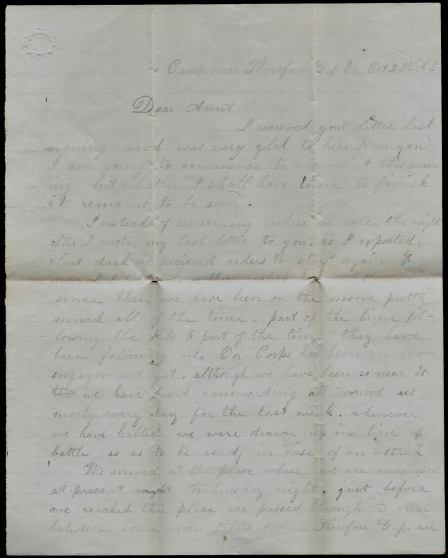 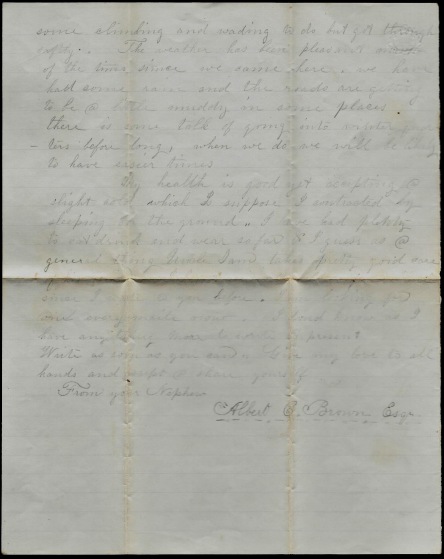