This letter was written by James Carter Mullin (1827-1910) of Co. I, 15th Indiana Infantry. This regiment was organized at Lafayette in May 1861, for state service, and was reorganized for U. S. service in June, for three years. It was mustered in June 14, left the state July 1, for Clarksburg, W. Va., then marched to Rich mountain, which was reached during the progress of the battle on the 11th, and joined in the pursuit of the enemy, capturing many prisoners. It was stationed in Elk Water valley until Nov. 19, being engaged in the repulse of Lee’s forces, and at the battle of Green Brier river. It joined Buell’s forces at Louisville, participated at Shiloh, the siege of Corinth, took part in the battle of Perryville, where Col. Wagner commanded the brigade, and moved for Nashville in November. Col. Wagner was appointed brigadier-general on Nov. 29, Lieut. -Col. Wood being promoted colonel. The regiment was in the battle of Stone’s river, losing 197, killed and wounded. It remained at Murfreesboro until June 24, engaged in numerous expeditions, and at Tullahoma it aided in turning the enemy’s left, compelling the evacuation of the place. It was in camp at Pelham until Aug. 17, and then began the advance on Chattanooga, its brigade being the first to enter the place. It participated in the Battle of Missionary ridge, losing 202 in killed and wounded — over 60 per cent of those engaged. It marched to the relief of Burnside at Knoxville and remained there on severe duty until Feb. 1864, without baggage or tents, poorly clad and half fed. Then it was on garrison duty at Chattanooga until June 14. Corporal James C. Mullin was one of the survivors of the regiment that mustered out at Indianapolis, June 16, 1864.

I thought that I would send you a few lines to let you know that I was well at present. This is a fine morning and we have nothing to do today. I hain’t allowed to tell you our situation nor anything about our movements. I was over to see the boys in the thirty-sixth regiment yesterday, I seen all of them. I found John Coombs very sick. He was moved to the hospital. There is a great deal of sickness in camp at this time. Bad colds is the go.

John, I would like to step over and take dinner with you today and then go back to my fighting but I am very well satisfied here, We have a nice place to camp and I get along with the boys nicely, I have no fusses with them. I mind my own business. We are drilling every day. I think that they were fighting on Green river yesterday for we heard heavy cannonading in that direction and how I longed to be there. The Thirty-seventh are there, I suppose. I think this thing will come to a close this winter.

My health is very good. I weigh more than I ever did before. I weigh one hundred and forty-four and a half lbs.

i have plenty of clothes—as many as I can carry on a march. We are about sixty miles from Louisville. We spent one week in Louisville and had a good time after a hard march from Virginia—that God forsaken country.

I am going to have an oyster dinner today for a rarity and a green peach pit—good enough for a dog. We get plenty to eat, thank God. Our regiment is reported at Washington not fit for duty. We cannot get out more than four hundred at a time. I though that C[h]arly Mullin was in the Thirty-sixth Regiment but I was mistaken.

I will have to come to a close. I want you to write oftener. Don’t wait for me to write. Tell John Dair if he don’t write to me, he can go to hell. Tell Thomas a letter from him would be very happily received. Direct to Newhaven, Nelson county, Kentucky, 15th Indiana Regiment, Co. I.

To John Mullin and family. 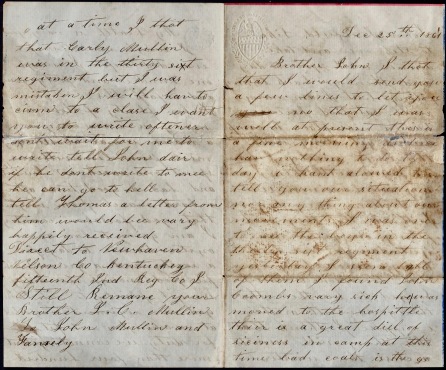 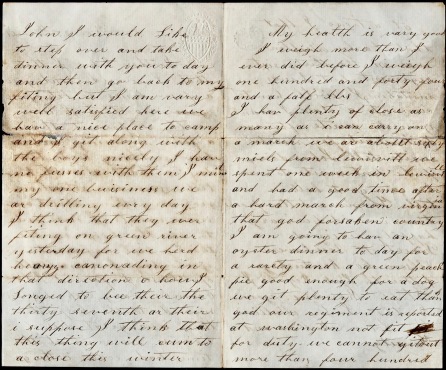