Since writing you this morning, I have received your good, long letter dated Sunday. How many times I thought of you all that day and wondered what you were doing. If I had had any paper with me, I should have written you a long letter. I have also received your half sheet enclosed in Lewie’s. They were handed me just as the assembly was sounded for battalion drill but I read them before going to drill and have done so twice since. You see it is over a week since I last heard from you. I think you must have missed one of my letters written about two weeks since. In it I told you that I had received my commission and was going to send it home. It did not come with the rest as they did not know my first name at Albany. I have also received my enlistment paper and the boots, and I spoke of them all in that letter.

I have just been out to see if my men have any lights as “taps” have been sounded (half past nine). I have just got a new floor in my tent and a new bunk—large enough for John [Dobbins] and myself. John is now sleeping in it though he has been quite unwell all the evening, in a great deal of pain, and sick at the stomach. He is much better now and the Dr. says he will be all right in the morning. He was downtown this morning and ate a hearty dinner which is the cause of his sickness. He makes a good officer and is liked by the men. My first lieutenant is to be here soon. Col. Chapin heard from him today.

I would like very much to have a nice piece of your cake tonight but you must not send me anything whatever if it is any expense. A captain is responsible for all company property; we all have to take receipts from the men for everything that they draw. The receipts for this company were given to the Quarter Master so all I have to go by is the word of the men. However, I have got the men to sign the clothing book as I am all sound there. I expect to be out something but cannot tell how much. Most of the captains are out from forty to sixty dollars worth but mine won’t be near that. I think if Capt. Ewell had really intended going with his company, he would not have let things run at odds and ends as they did. This I found out after I got here and have had to straighten out myself. He did not take a single receipt that he delivered. Now don’t let this bother you for I am all right now and am much better off than most of the captains. Capt. Sizer and Adjutant Weber have been very kind and have helped me a great deal. I have told you this that you need not expect all my pay this time, but I will send you as much as I can, which I hope will enable you to get you a stove and coal, and all else you want. I am glad you tell me all about such things. I like to know how you stand and if you want anything. I hope you will tell me all just as if I was there, and after the second pay day, we will get along so nicely.

I don’t think my expenses will be much now. I have been boarding at a mess where we paid three dollars a week. It was the best I could do at the time but the fare was not worth that. I have been on the lookout for a man, but have found none. Today I made arrangements with one of my men to cook for Capt. Sizer, Lt. Lannihan—his first lieutenant, Dobbins, and self. He is a splendid cook and we had three good meals today. Captain Sizer is to hire a man to black our boots, get water, look after our swords and tents, which I think is going to do first rate. I like the arrangement very much. We have a little table and a pitcher just back of my tent. The kitchen is a hole in the ground, about four feet long by eighteen inches wide and as many deep, with a crotch stuck up at each end and a pole resting across them and a nail driven into a tree which stand near. The nail is to hang the dish towels on. My washing is done by a Dutch woman who washes for a great many of the officers. She is in camp most every day.

I spoke of going to church in one of my letters; think you have missed one in some way or other. Will S. and I went to church one Sunday eve. We went to an Episcopal Church and heard a good sermon. The church is not far and I am going again soon.

Sunday mornings is inspection. This takes most of the morning. In the afternoon the chaplain holds service in front of his tent and it is required that one commissioned officer from each company be present. I would go to church Sunday evenings but the street cars don’t run Sundays and so have to foot it down and back. The church near here is not open every Sunday evening.

Our chaplain [Welton M. Moddesit ¹] is a Methodist. He is a good man and very pleasant. Preaches a good sermon. His prayer meetings are rather noisy and a little on the Nazerite order, but still he is not a Nazarine. My tent being very near his and almost directly in front of it, I get the full benefit of all the noise at his meetings which are generally twice a week.

How I should like to be at home for a week just now and help entertain Coz. Mary. I hope she will have a pleasant time and I guess she will. Am real glad she met the Misses Nortons. If ever you see Miss Mary, please tell her nothing would give me more pleasure than to receive another good letter from her. There are few I had rather receive one from.

I do not know which company Grannis is in and if I had seen him, which I presume I do every day, I do not know him. [I] had forgotten that he was in the regiment. And I do not know of a man by the name of Nichols but I will look them both up and report in my next.

I did see Dr. Hosmer and Mrs. Seymour and spoke of them in one of my letters, It seemed real good to see a Buffalo face. Dr. Hunt was here a week or two since. Also P. G. Cook. And while Capt. Gardner was here sick, his Father and brother were here.

I am glad to hear that you have had that chimney fixed. You don’t know how funny it seems for you to talk of fires, stoves, wood, &c.—-it is so warm here. The nights are damp and a little chilly but then the sun comes up warm and bright and it is soon dry and nice. You never saw such dews as they have here. It is a sort of a mist. It will wet a flannel coat through in no time. Every morning after the drill before breakfast, I have to change my socks because they are so damp from the grass.

I have received no papers since I came here but those Lewie sends and a few that John Dobbins sent me before he came. He received the box containing his overcoat and pants today. The coat is bully and looks nicely.

I guess Uncle Sam has not received my letter or he would have spoken of it to Grandma. I directed it simply, Samuel Atwater, Chicago. That ought to reach him. When you see Grandma again, give her a kiss for me and also my love. And give love to Granpa, Aunt Julia, Coz. Mary, and all. I guess you are sleepy, then don’t rub your eyes so hard. I knew you was. So goodnight and here’s a kiss from — Albert

Don’t let my pay bother you any but let me know how you are getting along. Grub all right. Will all right except a bad toothache.

Saturday morning. John is alright this morning. Is up and around. Some of the men are at work making us a table. It will look quite like home by tonight. This morning it was rather cool—I think the coldest morning we have had. I drilled the men mostly in double quick.

¹ Rev. Welton M. Modesitt was educated for a lawyer and graduated from the State University at Bloomington, Indiana, but after practicing law in Terre Haute for three years, he turned to the ministry and attended a theological course at Lane Seminary in Cincinnati where he graduated in 1846. He served as pastor of Congregational churches inn Vigo county before moving to New York State whereupon he became the chaplain of the 116th New York Infantry. 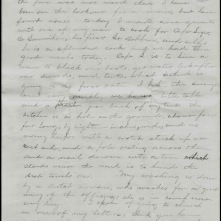 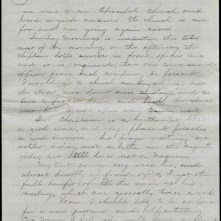