John wrote this letter from the camp of the 29th Georgia near Atlanta on August 9, 1864—the very day that Sherman began a daily artillery bombardment of Atlanta that would force Hood to surrender the city within a month. Less than four months later, John would be dead. He was killed in the fierce hand-to-hand fight at Franklin, Tennessee, during the twilight hours of 30 November 1864, as Hood’s army unsuccessfully tried to pin down and annihilate Schofield’s Army, caught off guard with their backs up against the Harpeth River.

[Note: This letter is from the private collection of Jim Doncaster and is published by express consent. The banner painting of the Battle of Franklin is by Don Troiani.]

Through the blessing of God I am again permitted to take my pen to write you a few lines which will inform you that I am enjoying good health. Both the other boys are well. The health of the regiment is generally good. Lieut. Johnson got back to the company yesterday. His wound is not entirely well yet but he has come back for duty.

We had another pretty hot skirmish day before yesterday. I had one man killed in my company and one missing. I expect he was taken prisoner. Some of our regiment was taken prisoners and retaken twice. Lieut. Mitchell was taken twice but he succeeded in getting away. There was several of our regiment that the Yanks succeeded in getting off with—Lieut. Col. [William Wyatt] Billopp ¹ and Lieut. [Mathew] Roberts ² was among the number taken.

There has been heavy skirmishing for the last week but there has been but little general fighting for several days.

We are having a heap of rain for a few days past. We had a heavy rain yesterday and from the appearance, I think it will rain again today.

Berry Gandy ³ got to the company yesterday. [Brother] Gibson says he will not write now. He said to tell you that he got the money all right. I believe I have written all that I know. We have but little to write about except the fatigue & danger that we daily have to encounter and that is beyond my description. I hope that God may bless & comfort you in all your trials and troubles. You will remember an absent son at a throne of grace and ask for the safe return of one who has been absent from home and friends so long. If we never more shall meet in earth, let us pray for each other that we may meet again beyond the grave where parting is no more.

P. S. While I write it is raining. It blotches my paper so bad I don’t expect you can read it very well. — John Lanier

¹ Lt. Col. William Wyatt Billopp served as commander of the 29th Georgia in Hood’s army when they marched into western Tennessee in late 1864. He was killed instantly by a bullet to the forehead while leading his men in a charge at Murfreesboro on 7 December 1864.

² Mathew Roberts entered the service as a private in Co. E, 29th Georgia but was elected 1st Lieutenant on 7 May 1862. He was taken prisoner before Atlanta on 7 August 1864 and was not released from Johnson’s Island, Ohio, until June 1865. 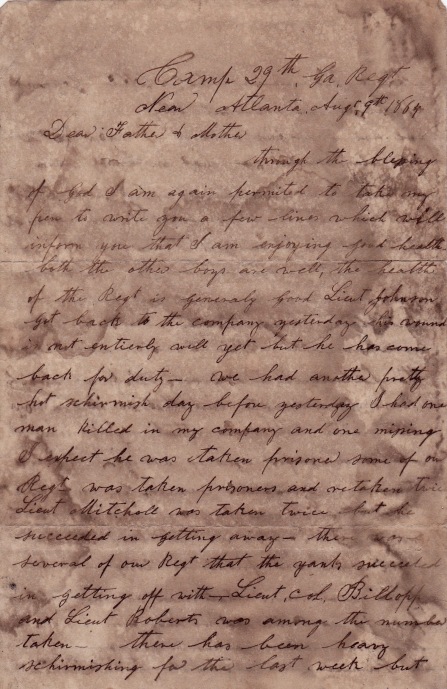 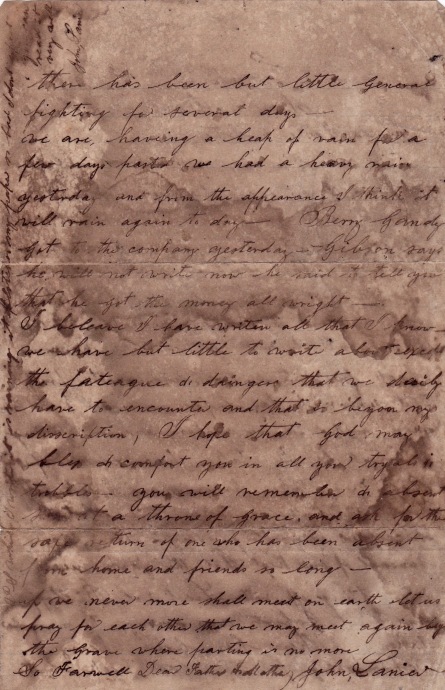