I received your welcome letters last night dated March 29th and I was glad to hear from you again and learn that you was all still well and may this letter find you all the same. I have been sick nearly two weeks—or rather I have not felt well and do not yet. I was in the hospital three days. I received that box that you sent by Express the eighth day from the day that you put it in. There was everything in it that you sent. They did not take a thing out to look in the book. I was taken sick two days before it arrived and I was sick when that man brought the other box that you sent. He said that he had a hard time in getting it through. I did not eat much out of the first box as I did not feel like eating anything. I saved the fruit cake and several other things till I got better and the rest I gave to Fred. The last box I kept everything but the ham. I gave half of it to Fred Shaw and a piece of a cake. The knife and diary book I got and the stockings. The boots I received with the rest of the things. They fit first rate. I don’t know as I ever had a pair fit me better.

Night before last we had a terrible snow storm with a very high wind but today it looks like rain. The folks that live in a house near our camp say that last year at this time they had potatoes up and it was terrible warm. They say that they never knew so late a spring in Virginia.

They are now drawing rations of fresh bread and as there is no news, I will bring my letter to a close for this time. From your true and obedient son, — Charles C. Miller

Write as soon as you can.

N. B. I received the one dollar and the postage stamps that you sent. A dollar at a time is enough. We will probably get our pay this week. Alice, I send this ring to you but if it is too big, let mother have it. Tuesday, I feel a little better today. I received a letter from Albert Miller tonight. I send these old letters home for you to keep.

President Lincoln reviewed our brigade today and I seen him. He is a very tall man. There was some sixty officers with him and a body of lancers numbering about fifty. 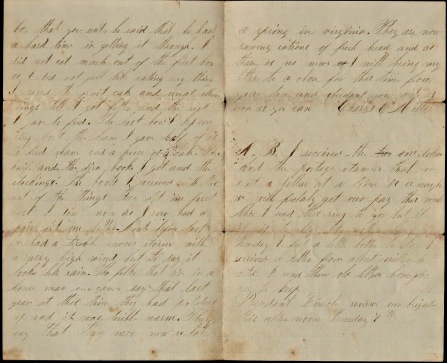