Having a few hours before night, I will take my pen in hand once more to let you know that I am still well as usual and I hope that this letter may find you all as well as usual and enjoying the pleasures of this world and hope that you may all I the world to come. It may be that may never meet on this earth again as I have said before and if so, may we all meet in that bright world to come where there is no where.

We have had a great snow storm down here which commenced the 22nd and lasted nearly two days. The snow is about two feet deep and now the brass band has commenced playing. It is a funeral. They are a carrying two from the regulars to their long homes [where they have fired a] salute over the grave and are about to return from the grave.

This morning the regiment went out on picket for to be home three or four days. The sun shines but the air is very [   ]. Fred brought me a letter that you sent by one of the lieutenants and the money $1.50 and the fine comb that was sent to me and I received the [   ]. I wrote you the fifteenth and have received no answer yet…

They still have us under guard in a large tent but we can go anywhere in the regiment but have to have a guard to go with us most of the time. They courtmartialed us on the 12th but we have not got our sentences yet but probably will on the next dress parade. They had the charges against us desertion and cowardice but we are not guilty of them charges and so we plead not guilty on them charges but we plead guilty on straggling so we do not know what they will make out of it. But I suppose that you know that they can do as they please or take a notion.

You wanted to know how it happened and all the particulars. I will tell you. On the second march it happened. We left or rather the regiment noon and they had not gone over three or four miles when we stopped in the woods for the night and during the night it commenced raining very hard and continued until nearly night the next day. Early in the morning of the first day the bugle was blown for to fall in and be ready to march at any moment. At last we started on the second day’s march—the mud about one foot deep and besides, in the clay, it would stick to shoes so that it was all that we could do to get along. But we made out to get about three miles and then I had to fall out where we waited for a few moments and then started for a house which we found. We then went into it and stayed nearly two hours. we made some coffee while we was there and after a little while we started off but could not find the direction that the regiment had gone in and so we got lost and that night we lay in the woods and in the morning of the next day we started off again and about noon the cavalry scouts picked us up and took us to their headquarters and kept us two days and then took us to our general’s headquarters where they kept us ten days and then brought us back to our regiment and put us under guard where we are still. I have told you as near as I can about it and I hope that you will not feel bad over it as I could not help it but I hope that it has learned me a lesson that I never will forget.

But as it is a getting late, I must my letter to a close, hoping that you will answer this as soon as you can and accept these few lines from your true and obedient son, — C. C. Miller 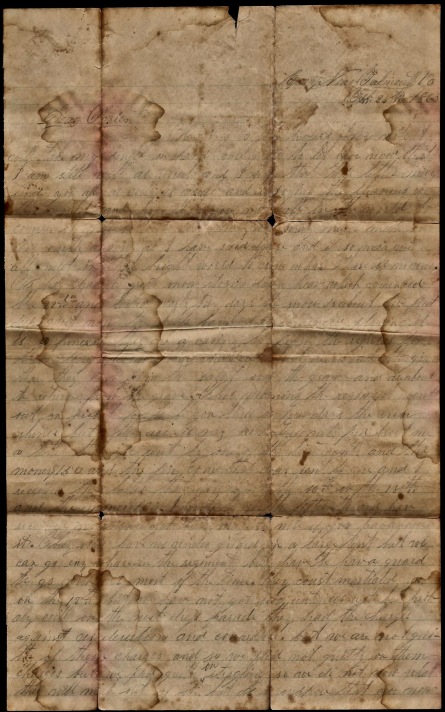 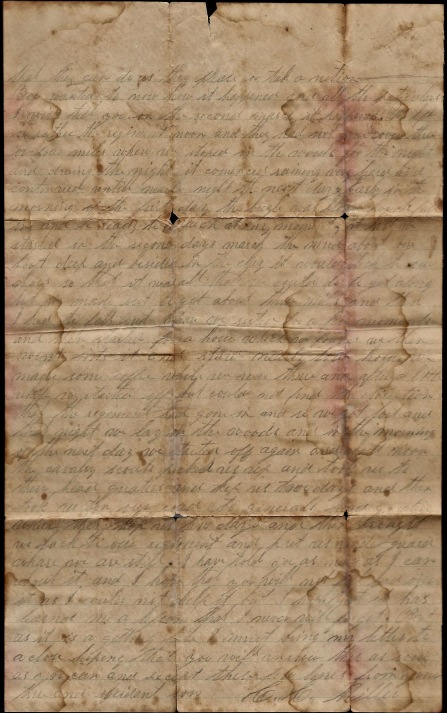