On 1 September 1862, Frank stepped forward to enlist in Co. H, 43rd Massachusetts Infantry (the “Tiger Regiment”), and he remained with them until the company was mustered out on 30 July 1863 at Readville, Massachusetts. After leaving the service, Frank and his wife relocated to Chelsea, Massachusetts, where he worked as a journeyman carpenter.

[Note: The header image is an Albumen View of Camp Rogers & the 43rd Massachusetts at Newbern, North Carolina, taken on 12 March 1863.]

I will now write a few lines to pass away the time. We are not laboring very hard at present & we must do something to help us from having the gout for we are all getting fat & dirty, & I think if we don’t have an attack by the lice before we get out of it, we shall be very lucky. I received your last letter in due time. Was glad to hear from you. I think by the tenor of your letter that you do not get half of the letters I send. I think I have sent much as four letters that you had not received. When you wrote your last letter. I write as often as one in ten days. But I think you don’t get the mails so regular as we do for I think I have received all of the papers & letters that has been sent to me though I get three or four at once sometimes. Perhaps yours will come the same way when the sign comes right. We expect a mail today & I hope to hear from you.

There is a great many rumors in camp about our leaving Newbern. Some say that we are going to Texas. Others think that we are bound for Charleston, South Carolina & others say it is Wilmington but I don’t see any signs of our leaving Newbern for some time to come. Yet we are liable to be moved any time. But the best way is to keep easy and wait for orders for they always come soon enough.

The Boys are healthy as a general thing but the general conversation among them is when is our time out.

We are all getting so fat and lazy that we shan’t be able to do anything after we get home. We are having a splendid flag staff erected in front of the Colonel’s quarters today. The base of the staff is made of a Magnolia tree, the top most is made of Southern Pine, surmounted with two tiger’s heads carried out of Mulbry. The height of the staff is eight feet & was got up under the direction of Lieut. Bradbury of Company H. The Colonel talks of taking it to Boston when the regiment goes home if he can conveniently. ¹

There was two large mails arrived in camp yesterday which made many smiling faces. I received a letter from Murry, one from Eunice, and one from Lozira for which I was terribly thankful. I also received a paper from Eunice, one from Mary, and one from you. I learned from Eunice’s letter that you had sent me a box. If so, I shall get it soon. I thought by Eunice’s letter that you had received some of my letters that had been on the road for a long time. I was somewhat disappointed in not getting a letter from you but trust I shall get one soon.

I will now close by saying goodbye. Write often. Give my best respects to Mother and all old friends. Yours most respectfully, — C. Frank Goodwin

¹ To read an account of a dispute between Colonel Charles L. Holbrook of the 43rd Mass. and Col. Codman of the 45th Mass. regarding the flying of Federal and State Colors on the “new flag staff,” read the 8 March 1863 letter written by Coleman Tilden of Co. H, 43rd Mass. 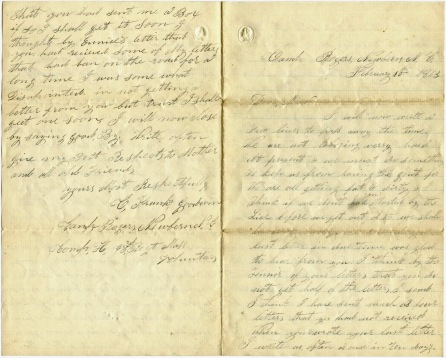