I received a letter from you tonight and I thought that I would answer it as soon as I could and so tonight I sit down and will write a few lines to you by candle light. I was glad to hear from you and learn that you was still well. I am still well and hope that this letter will find you all the same. I have not felt so well in a long time as I have for the past week or more. We are a having very good times now. There are eleven of us in one squad and I am the commander, or rather do the rations for them and do the cooking if there is any to do such as boiling beans and dried apples. They Frey their own meat and make their coffee. All that they have to does to put up beds in the tents for the officers and fix up around the tent. We are in camp near Kelly’s Ford on the Rappahannock river. Today we drew fresh bread for the first time since we left Aquia Creek and dried apples. We have had some very warm weather all of this month so far.

Tonight the [     ] cavalry went out for to feel where the enemy is over the ford where we are en camp. The enemy’s pickets are on one side of the river and ours on the other side. The boys often swim the river and go over and shake hands with them and they want our soldiers to trade sugar and coffee for whiskey but our officers do not allow them to do it.

Mother, I am sorry to see in your last letter that you thought that there was some [greater risk of injury to me on this detached service. I assure you that is not the case]. I am just as well off here as at the regiment but still I would like to be there. I wrote a letter to Uncle Cyrus last week to let him know that I am well and I wrote one to Isaac Collins too.

When you write again, let me know all about the draft and who has to go. Tell Milton that if he see that he has to go to enlist in the state militia, that two hundred came here today. I see it is getting a late at night. I will close but with these few words, dear mother, keep up good spirits as you can and it may be that I may return home when this cruel war is over. Has father got through harvesting and haying yet? Let me know.

No more at present so goodnight from your ever true son, — Charles Miller

P. S. Write as soon as you can. Send me some postage stamps if you please. There is no one sees my letter. I have written to Julia Anderson a long time ago and have received no answer yet. Let me know where she is. Probably I did not direct to the right place. This week Thursday they say that we get a new suit of clothing. (Direct as before). 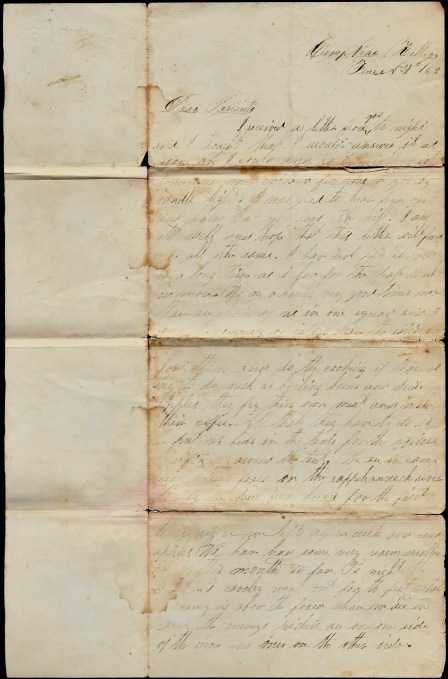 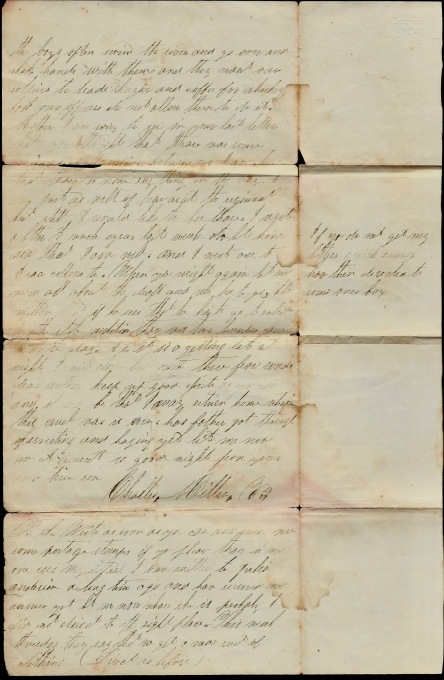