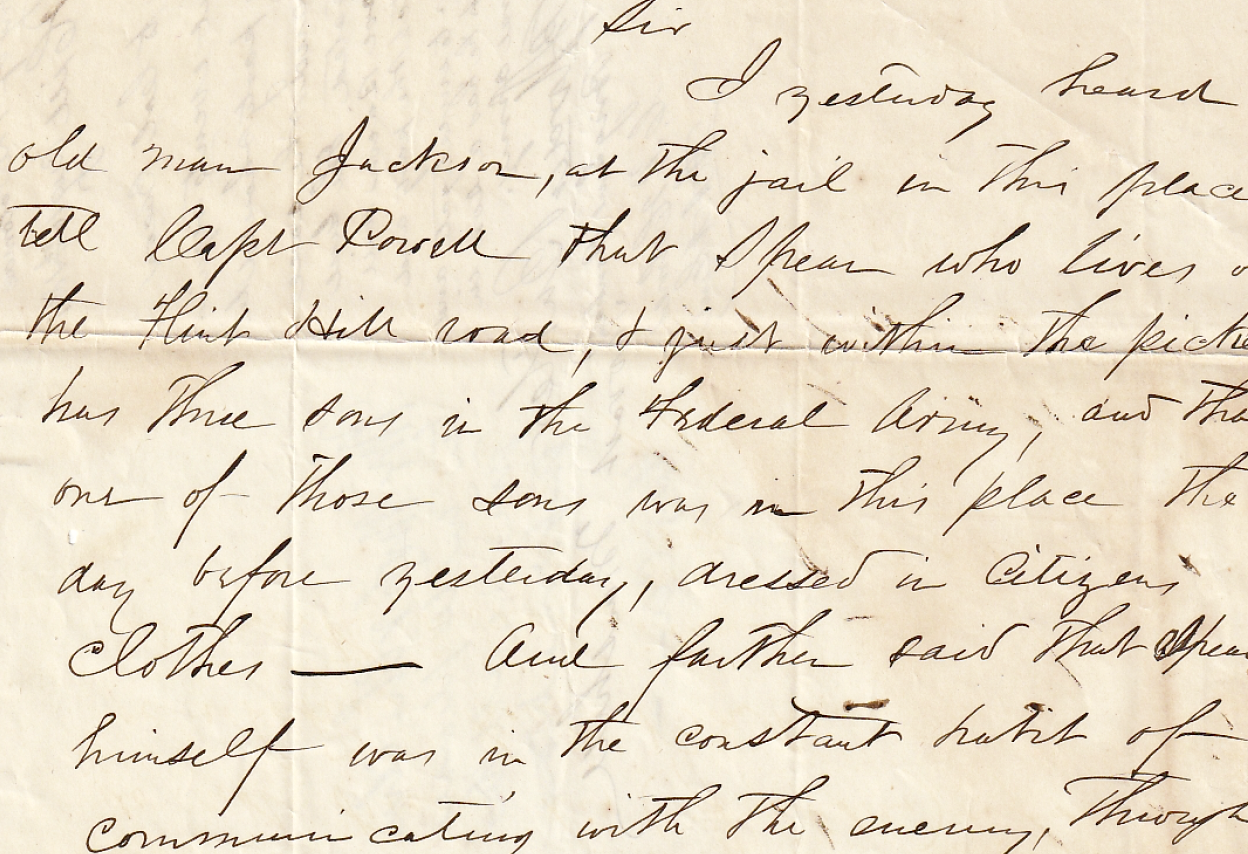 This letter was written by William Bernard Ball (1816-1872), a graduate of Jefferson Medical College, and a practicing physician in Chesterfield county, Virginia, when the Civil War erupted in 1861. He first entered the confederate service as a captain of Co. B, 4th Virginia Cavalry (Chesterfield Light Dragoons) in April 1861. By November he was Quartermaster for J. E. B. Stuart’s cavalry brigade. “Commended for his boldness and valuable assistance near Falls Church in February 1862, he was promoted to Lt. Col. of the 15th Virginia Cavalry in April 1862 and then Colonel in September 1862.” In December 1862, he had to remove himself from the field due to chronic liver disease. “He then detached to the Navy as “Acting Master,” but resigned from the Navy in December 1863.  [Source— “Sound and Fury: Dahlgren at Fredericksburg” by Robert Allan Stevens]

Capt. Ball wrote the letter to Major W. P. Butler, the Provost Marshal posted at the headquarters of the First Brigade of the newly designated Confederate Army of the Potomac. The First Brigade was led by Brigadier General Milledge L. Bonham—a Mexican War veteran who was a leader of provision confederate forces in the area.

The letter—datelined “Fairfax at House”—conveys intelligence to Confederate authorities on the possible disloyalty of a local citizen named Spear who had three sons allegedly serving in the Union army and who may himself be acting as a spy. A search of census records reveals the citizen was 49 year-old house carpenter William Pierce Speer (1812-1898) of Flint Hill Farm near Oakton (a small village roughly two miles north of Fairfax Court House, Virginia). William had three sons, Daniel Elsworth Speer (1838-1919), Nelson Fairfax Speer (1842-1922) and Cornelius Horton Speer (1845-1903). The eldest son most likely served in the Union army but may have enrolled under a false name. The second oldest son, Nelson, is known to have enlisted in August 1862 in Co. M, 2nd New York Cavalry. We know that William was subsequently arrested and imprisoned in Richmond for he was mentioned in a letter written on 13 May 1862 from A. T. Bledsoe, Asst. Secretary of War, to Brig. Gen. John H. Winder as follows: “William P. Speer to be discharged on taking the oath of allegiance and agreeing not to go to our lines or encampments.”

In response to the letter, General Bonham ordered Col. Thomas G. Bacon, 7th South Carolina, to keep an eye on the presumed traitor and his sons. At the time, Col. Bacon had his regiment encamped in the vicinity of Fairfax Courthouse and was regularly placing pickets on the Flint Hill Road, three miles above the town. It isn’t clear when Speer was arrested for Col. Bacon and his men left the area a short time later to hurry to the battlefield at Bull Run.

On the back of the one page letter, there is docketing, including Bonham’s signature, showing that he indeed took the matter seriously.

Curiously, though not commonly known, William Ball was a member of the ill-fated Confederate attempt to raid Johnson’s Island prison in Lake Erie near Sandusky, Ohio. This well-planned operation, which would have involved staging an attack from across the lake in Canada, fell apart when one of the participants became fearful and warned Canadian authorities, who then alerted the U.S. Government. Interestingly, the disappointed Confederates were not arrested or detained by the Canadians and were allowed to flee.

[Note: This letter is from the private collection of Richard Weiner and is published by express consent.]

I yesterday heard old man Jackson, at the jail in this place, tell Capt. Powell that Spear who lives on the Flint Hill road, & just within the pickets, has three sons in the Federal Army, and that one of those sons was in this place the day before yesterday dressed in citizen’s clothes. And farther said that Spear himself was in the constant habit of communicating with the enemy, through the back part of his place. I do not know his (Jackson’s) informant or whether Gen. Bonham may think it worth investigation.

Referred to Col. Bacon as recent events requires that this party should be watch[ed] and the case investigated. The General desires Col. Bacon will watch the party and endeavor to investigate and find out if he has a son in the Federal Army. 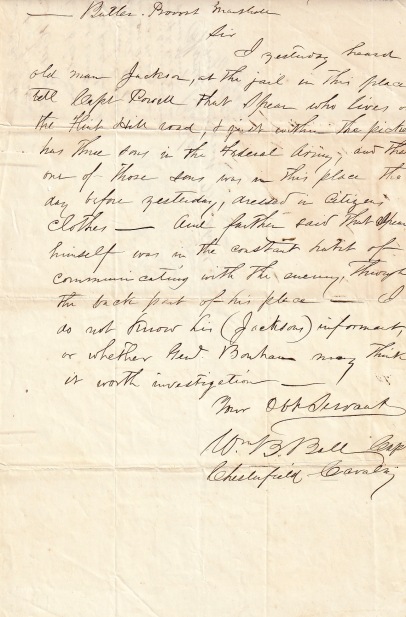 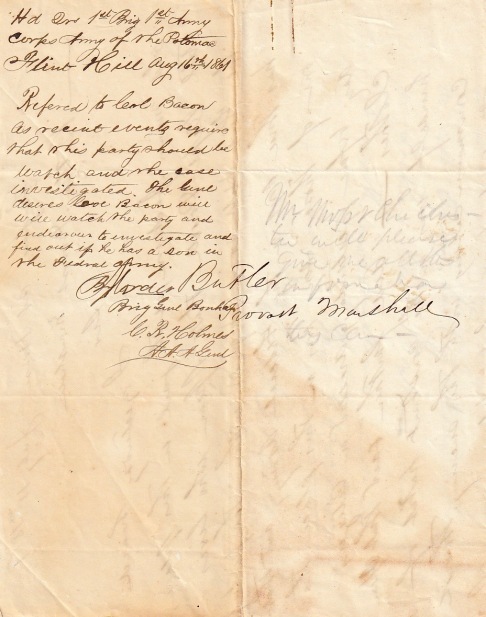