I am ashore today with the regiment, which will account for the heading of this letter. I received a good long letter from you last Monday. It was handed [me] just as I stepped aboard the steamer that runs between here and our ship. The regiment comes ashore now every day for air and for the purpose of ventilating the ship.

Day before yesterday we marched to Hampton—3 miles—where we were paid off. As soon as I was paid, I was ordered back to the Atlantic with about forty men to build some partitions to separate the companies so as to keep the men of each company by themselves so I did not have time to send any money to you till yesterday when I sent you one hundred dollars. I am very, very sorry it was not more but we were only paid from the time we were mustered with the regiment into the service of the U. S.  We have to pay a very high price aboard the ship for board or else live on hard tack and pork and whatever else we can buy. There are a few of us—Will Seymour, John Higgins, Charlie Wadsworth, Col. Chapin, Quarter Master Fargo, and Maj. Love who eat at the Captain’s table. The rest live at the pork and tack table, but I think it will cost them as much in the end as it does us and they have hard fare. I tried it but was hungry all the time because they didn’t half cook the pork—or salt horse, as it is called.

I have kept forty-five dollars. Now if you want more, please write to me and I will send it to you. Next pay day I will try and send you more.

Yesterday after seeing my men all ashore, John Higgins and I took the steamer for Newport News. She runs twice a day an any officer can ride free of charge as she is in the employ of the government. I saw Will Sizer. He is very discontented and says he is going home. I don’t blame him and only wonder he has stayed so long. His regiment—and in fact, the whole brigade—are nothing but an unmanageable mob.

The Monitor, Galena, and Ironsides are all there and can be seen from the shore. I did not have time to go aboard of them but had a good look at them as we passed in the steamer. The pictures that we see of them are just like them—except the Monitor. She is somewhat larger than I supposed she was. I hope soon to go aboard of them all. I also saw the wrecks of the Congress and Cumberland. The Colonel says that I may go to Norfolk some day before long if we stay here long enough.

Have you received the pictures that I sent of my tent and company street? I must now wind up or run down just which you like best, as it is time that I was with my company and the regiment is there-quarters of a mile from here. I have written this in a great hurry. I will not have time on the ship as we do not go aboard till nearly dark. I will write you again the next opportunity I have. Love to all and heaps for you from, — Albert

Please let me hear from you as soon as you get the money. 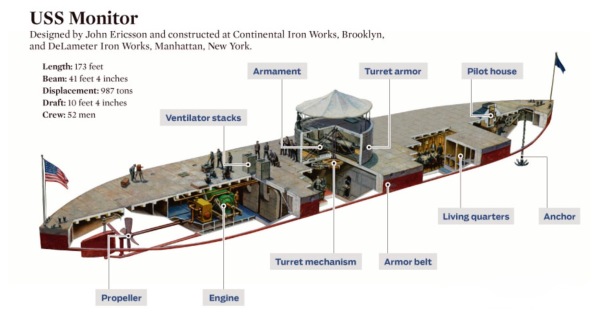 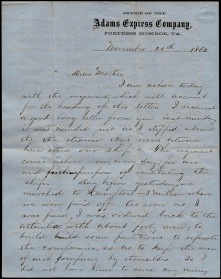 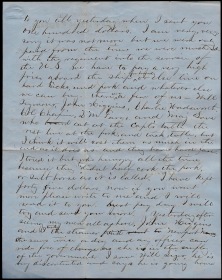 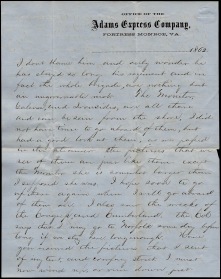 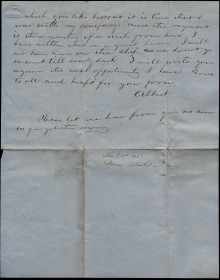