Your letter of the ninth arrived safe to hand and you may be sure that I was glad to get a letter from you. I will not ask you to write again for I know that you have a great deal to attend to, and Aunt Polly is so punctual in answering my letters that I am kept well posted in regard to you as well as the rest of the family. You probably see by the heading of this that I am back to my company once more. The fact is they couldn’t get along without me in the company. No one else could do the writing and company business so they sent for me. We have got new Captain (our old Captain has resigned) and he says that I shall have nothing else to do whatever. I don’t know but what I shall like it as all as I did my other place.

You want me to tell you how many battles I have been [in], and give you a description of one. I was with the regiment from the 5th of May until the first of September and we were under fire most of the time through the Wilderness, Laurel Hill, Spotsylvania, North Anna, and a number of engagements around and near Petersburg and the Weldon Railroad. I will describe the first engagement we had at Laurel Hill as well as I can.

The evening of the seventh of May we were in the Wilderness and drawed rations for three days. Most of the boys had heavy knapsacks. They were packed with clothing and valuables which they had managed to keep along with them so far for we had [not] been in any hard fights. About eight o’clock we started and marched all night “quick time.” I was tempted a number of times to throw my knapsack [away] but thought I would hang on to it as long as possible. The mud was about a foot deep and it was so dark we could hardly keep the road. A little after daylight we turned off into a piece of woods beside the road and halted.

We built some fires, got some water out of a swamp close by, and put on some coffee to cook. In about twenty minutes, “Fall in!” Away went the coffee and we had to eat our hard bread as we went along without it. We marched about a mile, passed a lot of cavalrymen huddled in the woods on both sides of the road who said, “Give to um, boys!” We drove them two miles and were still driving them when our ammunition gave out. We marched a little farther [when] the bullets began to whistle about our ears and the shells to burst over our heads and the solid shot to plough up the ground and cut off the trees all about us. Gen. [John C.] Robinson had command of our Division. He made us a short speech, told us he wanted us to take that battery, said it was an easy job [but he] was mightily  mistaken.

We were drawn up in line and ordered to fix bayonets. A man was killed in our company a few feet from me by a piece of shell. Charge! and away we went through brier bushes, over fallen trees, and stumps, and through swamps and mud holes. Got out into the open field. Could see the battery in the other edge of the field. We had to go over a small hill. Got most on top of it and were ordered to halt and lie down. We laid flat on our faces and they couldn’t hit us but ploughed the ground awfully on lots of the hill. Forward men! and away we went again.

A few rods farther on I let my knapsack go. We got to where the battery was and it wasn’t there. On we went but couldn’t catch it. Finally we emerged from a piece of woods. The Reb breastworks were a few rods distant and the Rebs were behind them. Whew! What a volley of leaden hail. Couldn’t stand that. Every man for himself and every man started for the rear. I saw Gen. Robinson being helped from the field. He was wounded in the leg and had to lose it. We finally got together again, formed a line of battle, put up breastworks, and remained in the vicinity about a week, fighting and building breastworks alternately.

It is getting to be pretty dark so I will have too close. Give my love to all hands and accept a good share yourself. My health is very good and I am getting along finely.

From your nephew, — Albert C. Brown 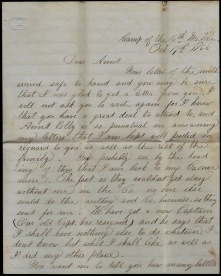 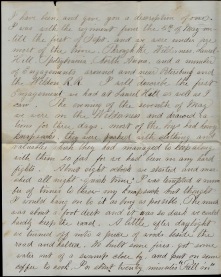