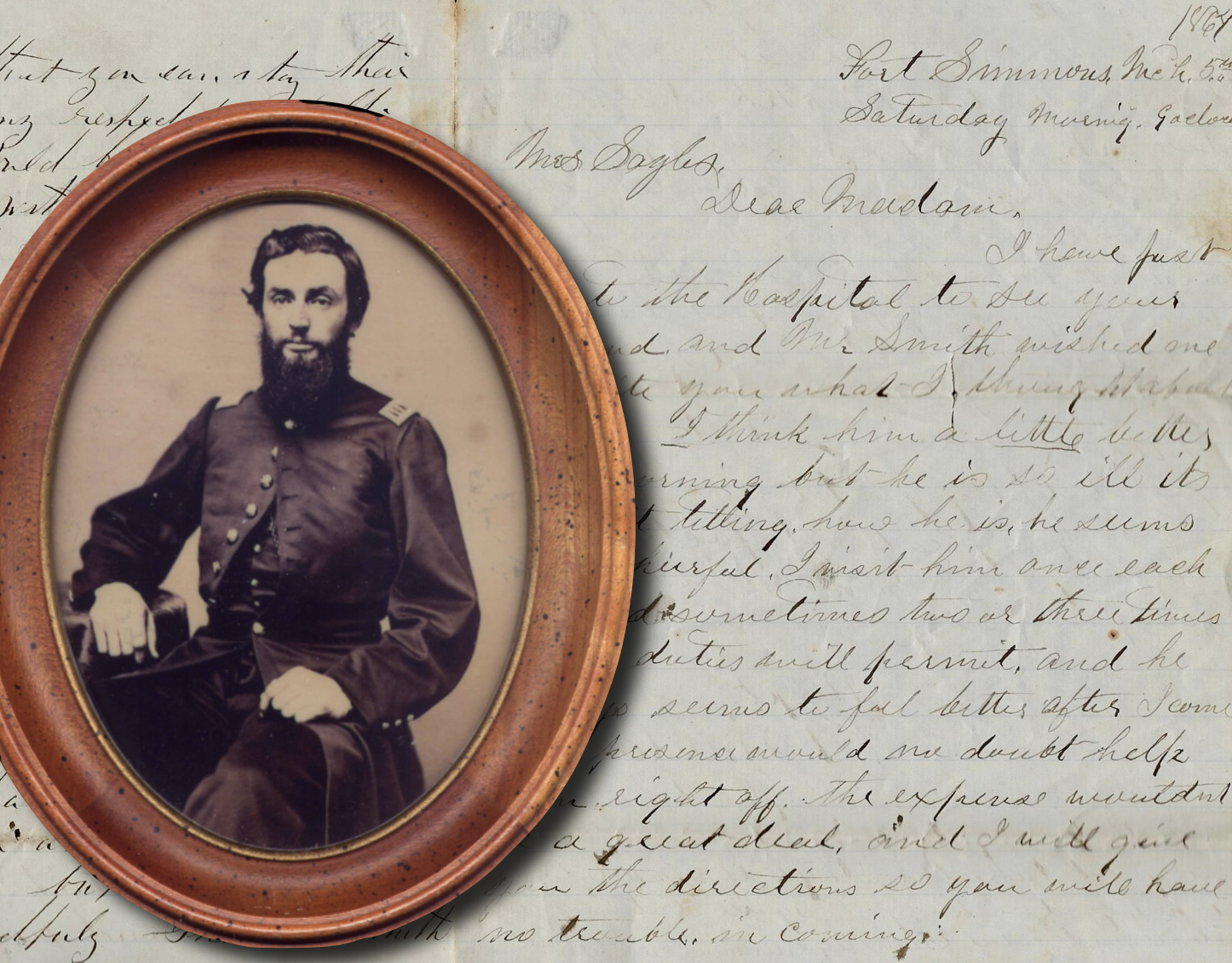 This letter was written in two parts. The first part of the letter was written by Frank Alexander Sinclair [photo in header] who enlisted on 4 September 1862 at Auburn, New York, to serve as a sergeant in Co. I, 138th New York Infantry (which became the 9th New York Heavy Artillery). On 22 February 1864, Frank was mustered in as Captain of Co. L. He was discharged for disability on 28 November 1864.

The second part of the letter was written by Sheldon Smith who enlisted on 30 December 1863 at the age of 27 at Marcellus, New York, as a private in Co. H, 9th New York Heavy Artillery. He transferred to the Second Artillery in June 1865.

Two days after this letter was penned, Capt. Sayles wrote to Mrs. Sayles informing her that her husband had died. [See—1864: Francis Alexander Sinclair to Margaret (Weeks) Sayles]

I have just been to the hospital to see your husband and Mr. Smith wished me to write you what I thought about John. I think his a little better this morning but he is so ill it’s difficult telling how he is. He seems quite cheerful. I visit him once each day and sometimes two or three times as my duties will permit and he always seems to feel better after I come.

Your presence would no doubt help him right off. The expense wouldn’t be a great deal and I will give you the directions so you will have no trouble in coming. Take the 12 o’clock morning train from Syracuse, cross the ferry at Albany and take the Hudson River Railroad, reaching New York about 10 o’clock evening. The train for Washington leaves Jersey City about 12 o’clock. You will have to take the ferry at New York for Jersey City. You will see plenty of passengers coming this way who will aid you.

I think you would do John a great deal of good to come and yourself a great satisfaction should anything serious occur, which I fervently pray may not.

Yours respectfully, — F. A. Sinclair

When you reach Washington, take the street car to Georgetown and if the weather be good, take the stage to Tennallytown. If not good weather, go to Squire Gladman’s livery stable and get a carriage. Anyone can tell you where.

[in a different hand]

I received your letter in due time but did not answer it before because I thought that you had started to come here after receiving my letter and telegraph dispatch and I went to Washington the 2nd and yesterday to see if you did not come but I found that Mr. Billiard had telegraphed to Capt. Sinclair and that the captain had answered back again. He told me that he telegraphed that John was better. I think that he is some but he is still a very sick man but he may possibly get well. I have just come from seeing him and he told me to write just what I thought best and I think that you had better come and see him. There is places here than you can stay. There is a great many respectable folks here that would be willing that you would stay with them till John got well and I know something how you must feel away from him.

I have done all for John that I could for a brother but I think it is the duty of every one to help one another—especially in sickness. If you come, when you get to Washington, take the street car to Georgetown and then take the stage to Tenelytown and the stage drive will bring you to Fort Simmons and you are then but a short walk to Fort Mansfield. Perhaps you had better inquire for Capt. Sinclair and he will show you the way.

But I must close. Yours respectfully, — Sheldon Smith 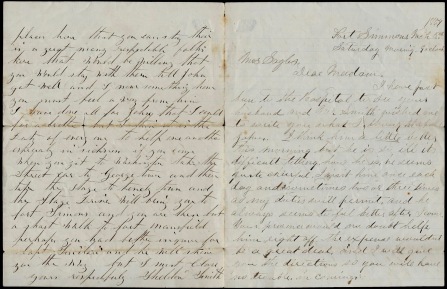 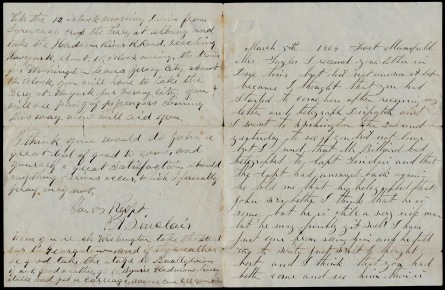