This letter was written by John Peter Augustus Dupon (1819-1863), the son of Peter and Doris Dupon. He left the Isle of Hope family plantation to go to Darien, Georgia, where he became a lumber merchant. He married Eliza Green Nichols in 1855 and built a summer house in Clinch county near the railway station. The town around this house is now called Dupont. He had 3 boys with Eliza: John Peter Augustus jr, Thomas Charlton, and Lee Lefebvre.

During the American Civil War, Dupon served as captain of Co. A in the 5th Regiment, 1st brigade of Georgia State Troops under the command of Colonel George Paul Harrison. He served until  March, 1862. Dupon did not die in the war but of pleurisy at his home in Dupont, Georgia, in 1863.

“The History of Clinch County, Ga” has some quite interesting stories about him, although not always accurate. [Find-A-Grave]

Camp Rebel Battery
Battery Harrison ¹ (how I despise that word Harrison. I presume before ling our privy pits will be numbered Harrison Pit No. 1, 2, 4 & so on.)
Sunday, March 9, 1862

In the absence of a line from you yesterday & no mail today, I must wait until tomorrow afternoon before I can hear from you, & your letters are so disconnected, it is difficult for me to make out if one or both of the children are sick, or which, or if both have the measles. If it is so, & my letters have reached you, I have fully explained the treatment, light nourishment, warm teas and gentle stimulants without any medicine or possibly a slight dose of oil of the bowels are out of order & syrup of sequels of the cough. Honey is also excellent. The measles is nothing. The danger is taking cold. Care must be taken to avoid cold at least 10 days after they are up.

Independent of feelings of restless uneasiness, I feel rather badly today. I eat a piece of soft fish for breakfast & it has unsettled my stomach all day.

George Long has just been here for me to write for him an application for a post in the Confederate service. He seems to be truly bad off. He had to decamp from St. Marye in hot haste & without a dollar in his pocket. He left his wife in Darien but as the people are all fleeing from there, she will be no better off. The DeLorme’s were speaking of going to Doctor Town or Johnson’s Station. I would be glad if you could have them with you. Old Mrs. D should not be forgotten in this emergency. She was a fried when you most needed one.

Will you tell me whether you ever received any letters from me asking you to send Smith’s Pegrument with Steadwater—also about Spencer’s note—also about the lost furniture—also about your writing to Schlatter about it. These are things I should like to know something about, & if you have no time to attend to these little matters, hire someone to see to them & relieve me & my mind of these annoyances.

Spencer has lost his jaw & can get his little. Write if you will send the note in time, or I will have it to pay which is easily done as I am a monied man.

It is so strange when I write about some little matter I can never hear from it again. How can I ever make my way through this world with such drawbacks. Nothing but the force of an iron perseverance keeps me going, but I cannot last long at it. My better nature is giving way under the force of circumstances in battling for the mere pittance I can chance to grasp. 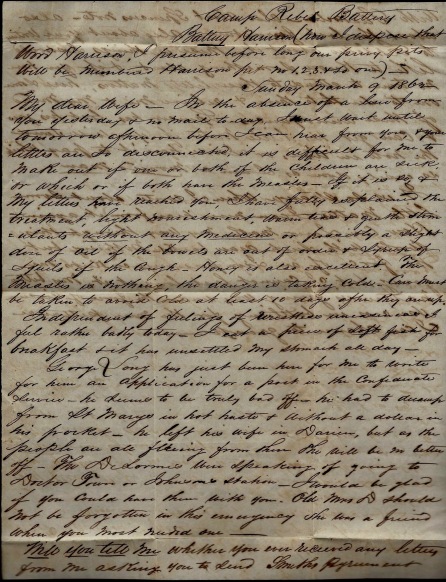