These two letters were written by Levi H. Myers (1841-1926), the son of John Myers (1814-1886) and Susan Frock (1820-1882) of Carroll county, Maryland. Levi and his younger brother, Josiah Myers (1843-1916) both enlisted in Co. C, 6th Maryland Infantry in August 1862. Josiah was discharged for disability after only a few months service but Levi continued with the regiment until he was wounded in the Battle of the Wilderness on 5 May 1864, after which he was transferred to the Veteran Reserve Corps (VRC).

I sit myself down this evening to write a few [lines] to you [to say] that I am well and my foot too. I use some strong lineament. I hope these few lines will find you all in the same state of health. I received your kind letter this evening and the gloves too, and they fit me bully. I am very much pleased with them gloves and you just pay for them, sir, you please let me know who made them gloves and what they cost. As soon as I opened that letter, I see Josiah didn’t write it and it was no other name in it. I would like to have my jacket yet but I can’t send for it yet.

We expect every day to cross the Rapidan River. Then we have to do some fighting. As soon as I get settled once, I [will] send for my boots and all, I also tell you that the railroad is done again. The cars is running day and night with rations and supplies. They say as soon as they got twenty days rations up here at Culpeper, then they want [to] cross  [the river] and whip the Rebels out.

Josiah, I must now come to a close. It is getting late. We are still at the old place but how long, I don’t know. It is not for me to say. My dear brother, I am very glad and thankful to God that my foot is getting well again. No more at present. Leave Mother see this letter. I think a many a time about here. Goodbye, Josiah, for this time till I hear from you again.

I hope and trust this will find you all well. Write soon. 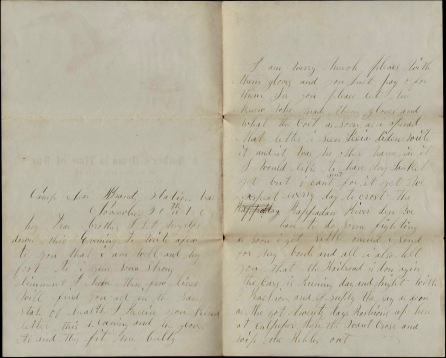 In this letter, Levi describes the participation of the 6th Maryland Infantry in the Mine Run Campaign of late November 1863. The 6th Maryland was led by Col. John Watt Horn and they were brigaded with the 110th and 122nd Ohio, and the 138th Pennsylvania in William French’s III Corps of the Army of the Potomac. Meade’s army hoped to catch the Confederates off guard but bad roads slowed the advance and foiled the surprise attack. In his after action report, Brigade commander Keifer showered the 6th Maryland with praise: “The 6th Maryland Regiment was under heavy fire from the commencement of the action until near its close and maintained its ground gallantly and remained in its position until the battle was about ended. It was relieved about 6 p.m. Its supply of ammunition was also exhausted.” [The Lost Diary of John Rigdon King, by Donald Jenkins]

The envelope was addressed to Levi’s father, Mr. John Myers, Frizzellburg, Carroll county, Maryland, and was hand carried by George Welk. The header image shows the Army of the Potomac crossing the Rapidan River at Germanna Ford.

I once more sat myself down to write a few lines to you that I am hearty. I hope when these few lines reach you, it will find you all well.

Josiah, I also [tell] you that I done some gallant fighting since I wrote last to you. [On the] 26th of November we left Brandy Station and crossed the Rapidan River [at Germanna Ford] and on 27th we was led into a fight but thank the good Lord, I stood bravely and shot 34 rounds at them and got [back] safe and sound. [There were] only two killed and 8 wounded in the company. John Fitch is one of the wounded.

I tell you, our regiment fought bravely for the first time. A man can’t help to fight when [he] sees the Rebs come out in the open field and shake the flock at us. A man is bound to take good aim. Then the flock fell to 3 times. I also tell you that we had to fall back again on this side [of] the Rapidan River on account [of] the bad roads. We could not get our big guns along.

The 3rd of December we arrived here at Brandy Station and [am] very glad I was down there. We had to march day and night. We are now in some kind of winter quarters now—such old huts that the Rebs put up and we run ’em out again. But whether we stay yet, I don’t know. They say [we] have marching orders again.

My dear brother, what made me write before I got an answer from you, I want a box sent on with my boot and jacket and one flannel shirt and a pair of stockings and one little towel. That’s all in that line, I believe, and a piece of tallow to grease my boots. Now I want a little in the eating line. 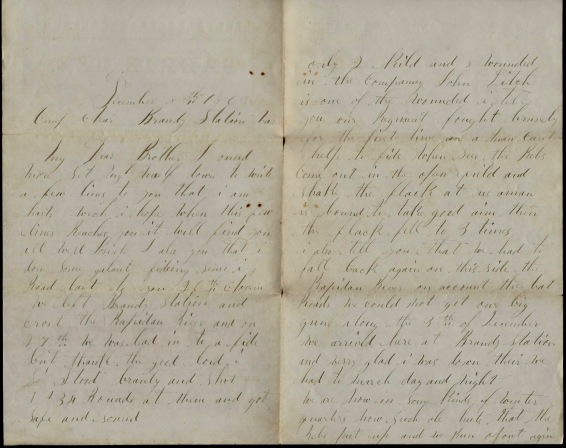 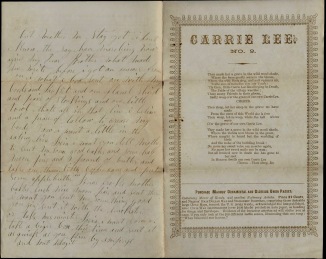