This letter was written in May, 1863, from Union Mills, Virginia. “The regiment was employed during part of June in guarding the Orange & Alexandria railroad at Catlett’s and Bristoe Stations. On June 25, with the rest of the brigade, it began its long forced march to join the 1st corps at Gettysburg. At Emmettsburg on the 30th, the 15th and 12th regiments were detailed to guard the corps train, which they escorted to within about 2 miles of the battle-field on July 1. That evening the 15th was ordered to join the 13th, 14th and 16th, and bivouacked in a wheat field to the left of Cemetery hill. At noon of July 2, while serving as support to the batteries on Cemetery hill, it was ordered to return again and assist the 12th in guarding the train. A detail of two companies, with two from the 12th, had charge of the 1st corps ammunition train near the battlefield. The command overtook the train at Westminster, and moved with it via Frederick City and South mountain towards Hagerstown, Md., rejoining the brigade at Funkstown. During the pursuit of Lee it formed in line of battle on the right of the 1st corps in front of Hagerstown, 200 men of the 15th being thrown forward as skirmishers. When Lee effected his escape into Virginia the regiment was ordered home, arriving in New York City during the draft riots. Its term of service had expired, but it remained at the request of Gen. Canby until order was restored. It was mustered out of service at Brattleboro, Aug. 5, 1863.”

I have just now received a letter from Hattie & I thought I must write to you next as it has been some time since I wrote to you. This has been a pretty bad day. It has rained all day very hard & it is now four o’clock P. M. & hasn’t stopped raining. But it looks some as though it might stop before long.

I have just got out of the hospital & am not feeling very well. They have been trying to have me have the measles the second time but they couldn’t make it work very well for I had the measles some twelve years ago & I don’t believe I am handsome enough to have them the second time. The doctor came down to see me Monday morning & said I had got the measles & must go to the hospital. I told him I hadn’t got them but he though I had so I went to the hospital Monday morning & stayed till yesterday and then came back to the camp.

I have not been very well for the last week nor very sick either. Guess I shall be all right in a few days if nothing happens and be ready to do duty next week.

I have just received a little package of new sugar from Mr. Freeman Keyes of Newbury. He has come on to see his son in the 12th. They are some six or seven miles from here. So when he got to Alexandria he sent the sugar right along by mail to me. I tell you it tasted pretty good. Perhaps we shall have some sent from home.

One week ago last Sunday we got marching orders to be ready to march the next morning at half past seven with seven days rations & we expected before this time to be in Richmond but it seems we haven’t moved from here yet & don’t know when we shall. We are liable to move any day & perhaps shan’t go for a month. We are now doing picket duty & probably shall while we stay. Our A tents have been taken away & turned over to Government so we are living in shelter tents now. But we get along very comfortably—sometimes leaks a little when it rains but that’s nothing you know.

George Knight has been moved to Alexandria to a hospital & his wife has gone home to Vermont. 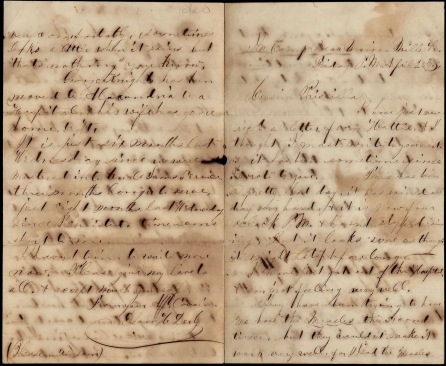 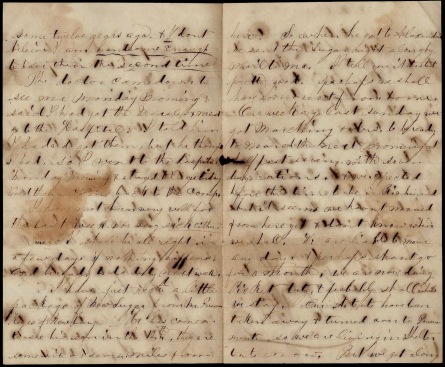