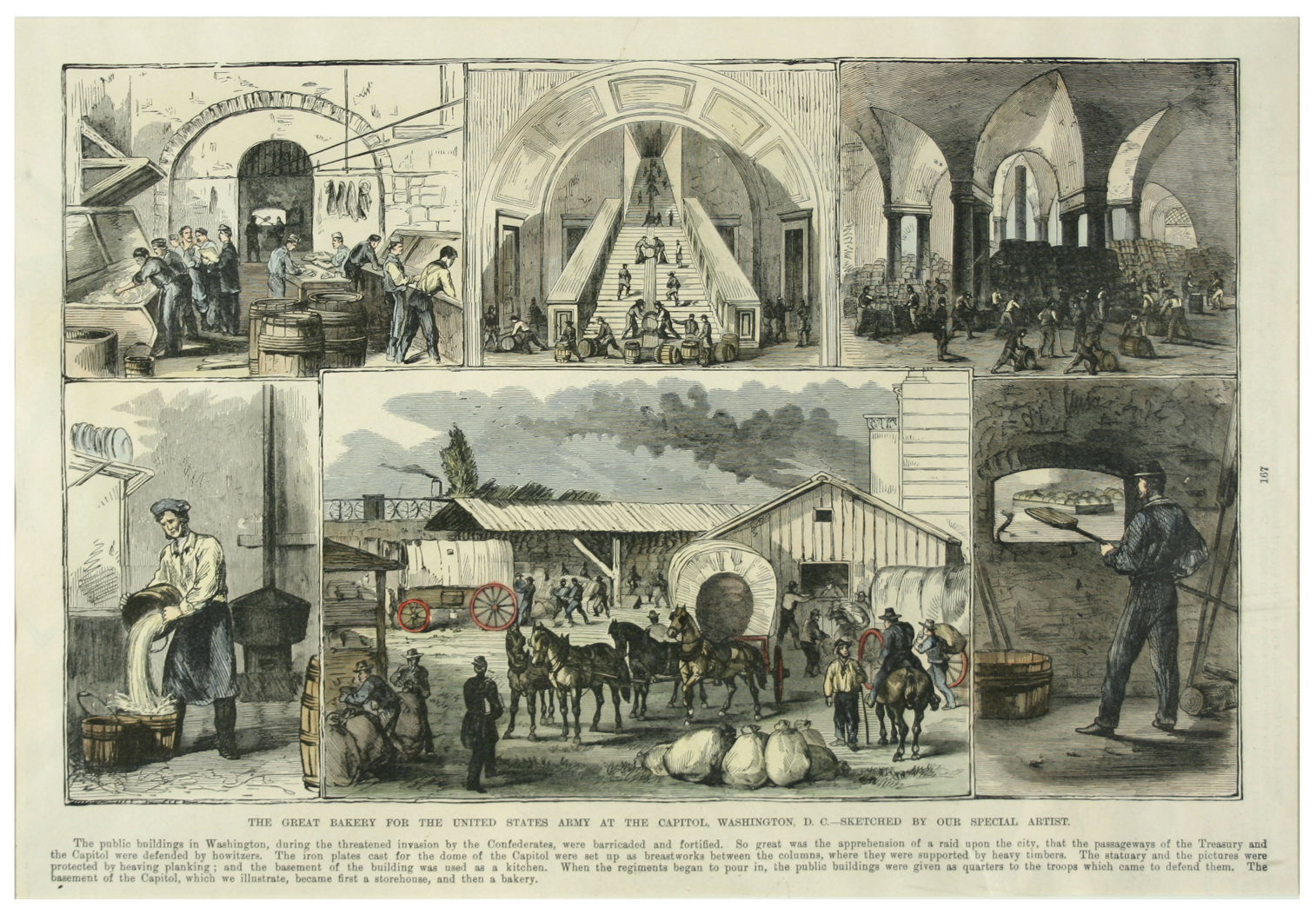 This letter was written by Daniel Burdick Maxson (1829-1863), the son of Josiah Godfrey Maxson (1793-1874) and Lois Burdick (1793-1865). He enlisted on 10 July 1861 in Co. F, 4th Wisconsin Infantry, and progressed through the ranks to First Sergeant, 2nd Lieutenant, and 1st Lieutenant. Maxson died on 16 July 1863 as a result of wounds he received on 2 June 1863 in a skirmish at Clinton, Louisiana. After Maxson’s death, the 4th Wisconsin Infantry became the 4th Wisconsin Cavalry although they had performed duty as “mounted infantry” as early as May 1863.

Daniel was married to Esther Emeline Babcock (1832-1861). He wrote this letter to an unidentified cousin named “Hattie.”

Maxson’s letter provides us with a great description of Washington D. C. in the fall of 1861, including a reference to the bread ovens in the basement of the U. S. Capitol. He also shares his apprehension for the future and the Lincoln administration: “We have a hard road to travel to conquer this rebellion. I believe I shall live to see it die and with it, the damnable institution which is the cause of it. But I do seriously fear that the present administration will fail to meet God’s purposes and that He will be obliged to depose them and raise up others who dare do His will.”

You may be assured that I was greatly pleased at the reception of your good letter the other day. True, I have but little leisure, but I will take a few moments to talk with you.

You spoke of my bereavements. Oh my cousin! Sod has taken away my darlings. I tread alone the weary walks of life. My noble, talented affectionate wife and my beautiful baby are sleeping under the violets and they will come to me no more. Oh, it is so lonely, lonely without them. Harriet, you have seen trials. You have been afflicted with disease. Your aspirations have had their wings clipped. You know what trial is. But may God in his infinite mercy save you from standing by the grave which has closed over your household jewels—your earthly darlings. Such is my prayer.

Through the blessing of God, I have in some degree bowed to the terrible blow and I can say, “thy will be done” though my heart is crying for my loved ones. The exciting scenes of war furnish occupation for my thoughts so that my loss does not weigh as heavily on me as when at home.

I am now with my regiment again at the Relay House. [My brother] Darwin ² has doubtless told you of my whereabouts. I had much rather be here handling a musket than driving the goose quill at Fort McHenry.

My health will not endure confinement. If ever I regain it at all, it must be now. General Dix gave me leave of absence for a week and I went down to Washington and staid several days and saw the “pomp and circumstance of glorious war.” The basement of the Capitol is used for an everlasting bakery. More than 200,000 loaves of bread are baked daily for the great army in and around Washington. ³ The splendid Patent Office Building is used for a hospital for the sick and wounded. The fine grounds around the Washington Monument are used as a yard for thousands of cattle which today and tomorrow are not forever. In short, Washington presents the appearance of a beleaguered city.

I went (by the kindness of Lieutenant King of Wis.) over the chain bridge into Virginia and staid with the Wisconsin 5th and 2nd all night. I slept on the further side of the furthest advanced regiment of our forces. I never saw a more splendid night than the one I spent in Virginia. The moon hung glistening in a cloudless sky and her beams fell on countless white tents, stretching away as far as the eye could reach, on gleaming bayonets, on huge cannon, on impregnable fortifications which bind the highlands west of the Potomac together as with a mighty chain. The rebels can never break through them to storm our Capitol. Neither can we go “forward to Richmond” through the terrible batteries of the enemy till we have drawn off a part of their great forces by demonstrations on the coast. Such I think is the plan of the government. We have a hard road to travel to conquer this rebellion. I believe I shall live to see it die and with it, the damnable institution which is the cause of it. But I do seriously fear that the present administration will fail to meet God’s purposes and that He will be obliged to depose them and raise up others who dare do His will.

Fremont alone has met the question and handled it as God would have it handled and government will probably remove him for it. Seward is a mighty humbug and Lincoln is his willing tool. Neither of them meet the crisis like men, nor Christians, but like politicians who dare not say their souls are their own.

I am tired, cousin, and must stop, Please write me again. Direct to Baltimore, Maryland.

My love to Ira and the child. — Daniel

¹ The Relay House was located nine miles south of Baltimore at the junction of the Baltimore & Ohio Railroad and the Washington Branch of the B&O—a strategic crossroads.

² Rev. Darwin Eldridge Maxson (1822-1895) was born at Plainfield, Otsego Co., Sept. 15, 1822, died at Alfred, Feb. 22, 1895. His ancestors were Scotch Irish. Joel Maxson, a native of Hopkinton, R. I., early moved to Berlin, N.Y., His wife was Rachael Coon, daughter of Joshua. Dawrin when 13 became a member of the Seventh Day Baptist church at Brookfield, N.Y. He served a two-years apprenticeship at blacksmithing, worked two years as a journeyman, then seems to have cared for his father[‘s] family, and attended and taught school until 1845 when he passed two years teaching and working at Westerly, R.I. He came to Alfred in 1847, attended Alfred Academy for two years supporting himself by teaching and other labors. In 1849 he became a member of the band of teachers, Kenyon, Sayles & Co.” which conducted the academy until it was chartered as an university. In 1851 he was admitted as a “senior” in Brown University and at the end of the year received his diploma. He then was professor of natural history and natural science in Alfred University until November, 1861, when he enlisted. While teaching he used both to preach and lecture, and showed rare powers as an opponent of intemperance and slavery. July 7, 1853, he was ordained as a minister and became pastor of the Seventh Day Baptist church of Hartsville for several years. He was elected and commissioned chaplain of his 85th N.Y., regiment soon after his enlistment, and did valuable service in the Army of the Potomac until malarial fever caused his resignation, June 23, 1862.

³ “Construction for the bakeries began on April 21, 1861, and the large brick ovens were completed on April 28. The ovens were located in HB-29 and HB-28 while HB-27 was used for mixing yeast and other baking operations. Eventually, bakery-related tasks occupied the entire west basement of the center building. In February 1862, a “Harper’s Weekly” reporter stated that there were 14 ovens that baked 200 loaves a day, and six or seven ovens that baked 800 loaves a day. The bread was passed out through the windows to troops and freight wagons waiting in the courtyard. The bakeries continued to produce food for the Union armies in the area, even after troops were no longer staying in the U.S. Capitol. Within six months of the bakeries’ installation, complaints began pouring in from Capitol occupants who were concerned about the smoke damage the bakeries were causing to other parts of the building. Money for the removal of the bakeries was authorized in July 1862, and they were removed in October of that year.” [See Then & Now: Capitol Building Superintendent’s Office] 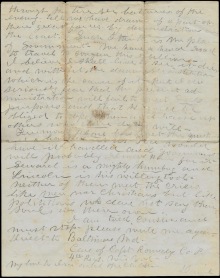